Mine Train Through Nature's Wonderland was an attraction at Disneyland that ran from 1960 to 1977, when it was closed to make way for Big Thunder Mountain Railroad.

The attraction itself was an expansion of the 1956 Rainbow Caverns Mine Train attraction and featured numerous wilderness environments and animatronic animals.

Narrated by an old prospector (voiced by Dallas McKennon), the train ride began in the mining town of Rainbow Ridge. The train ride begins with a journey through a train tunnel into Beaver Valley where beavers are building a dam and marmots look down on guests from the rocks. The trains then go under the waterfalls of Cascade Peak known as Big Thunder and the Twin Sisters. Passing into Bear Country on an old trestle, the trains overlook bears fishing, climbing trees and scratching their backs and pass by two elk battling for mates.

The trains then enter the Living Desert through the Natural Arch Bridge. Sights here include snakes, wild pigs, tortoises, whimsically shaped cacti, a bobcat chased up a cactus by javelinas, colorful boiling mudpits known as the Devil's Paintpots and a series of geysers including Old Unfaithful, the bones of a tyrannosaurus, coyotes, teetering stones in Balancing Rock Canyon, and cougars. Finally, the trains enter the colorful depths of Rainbow Caverns, passing by colorful features, such as Bridal Veil Falls, Dance of the Seven Sisters, The Witch's Cauldron, Geyser Grotto, Angel Falls, Devil Falls, and the Rainbow Falls. After leaving the caves the train returns back to Rainbow Ridge.

Mine Train Through Nature's Wonderland was closed in 1977 and replaced by Big Thunder Mountain Railroad, which opened in 1979, owing to the demand for thrill rides in the 1970's. When the attraction was replaced, the new attraction would feature several references to its predecessor (one of the reasons being the fact that Nature's Wonderland was an enormously large attraction that encompassed a great deal of Frontierland's real estate):

In addition, other remnants of the attraction were left behind and several portions still exist today, such as the Bear Country pond (with the jumping fish still active) and train tunnel and various rock structures from the Living Desert can be seen at Big Thunder Ranch. Across the way from the entrance to Big Thunder, another tunnel, closer to the walkway, remains, still ballasted and with track.

Cascade Peak and its waterfalls remained until 1998, when water damage and other structural issues forced its demolition and an actual ride vehicle was on display as a derelict train with animals popping out for decades until the Walt Disney Archives took it into storage for possible restoration and preservation. In 2014, it was announced that the train restoration project would be taken up by the Carolwood Pacific Historical Society and that the restored train would become a new exhibit for the Walt's Barn area at the Los Angeles Live Steamers Museum.

When the Disneyland Railroad reopened in 2017, the Frontierland portion of the route was reimagined with Nature's Wonderland in mind, featuring a number of animal figures situated in the waters of the Rivers of America and near the track. The narration during this section even alludes to Nature's Wonderland by name.

Much of the Frontierland-based levels in Epic Mickey 2: The Power of Two drew inspiration from the attraction while blending in other Disney elements such as Cascade Peak becoming part of the Tom Sawyer Island-based level, a Seven Dwarfs-inspired Rainbow Falls and the Angel/Devil Falls taking inspirational cues from Beauty and the Beast and Mr Toad's Wild Ride.

The Mickey Mouse TV series dedicated an episode to the attraction and Big Thunder titled "Nature's Wonderland" focused on Mickey and Minnie seeking out the Rainbow Caverns for a romantic vacation, only to end up on a runaway mine train through Big Thunder Mountain and various sections of the Living Desert before finding the caverns (complete with their original music) after a large dynamite explosion opens a path to them. 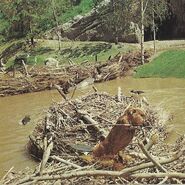 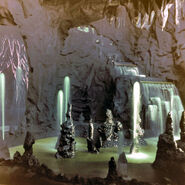 Abandoned Mine Train, removed in 2009