Disney Wiki
Register
Don't have an account?
Sign In
Advertisement
in: Characters, Elena of Avalor characters, Disney characters,
and 17 more

Migs (father)
Dulce (mother)
Mingo, Zoom, and Estrella are three Jaquin cubs who appear in the Disney Channel animated series Elena of Avalor. They are the children of Migs and his mate, Dulce.

The Jaquin cubs are quite precocious, developing certain abilities sooner than expected, as they hatched out, learned to talk, and fly much faster than other baby Jaquins. Like all baby Jaquins, they will only eat anoki berries or food with anoki berries in them and get cranky enough to tear a place apart when they get hungry. However, all three are different.

Mingo, Zoom, and Estrella first appear in "Three Jaquins and a Princess" as eggs after their mother lays them. Since this happened sooner than expected, Dulce goes to find some anoki berries and leaves Migs in charge. Suddenly, they begin to hatch sooner than expected and Migs decides to go help Dulce. Princess Isabel offers to babysit them to show she can be responsible and Migs agrees since it usually takes a day for Jaquin eggs to hatch.

However after Migs leaves, the eggs hatch sooner than expected and Mingo, Zoom, and Estrella are born. The trio quickly reveals that they already know how to talk. Mingo calls Isabel "Mommy" to which she tells them she's not their mother. Zoom and Estrella get the message and call her "Isa" but Mingo still calls her "Mommy". Isabel teaches the three of them a clapping game which convinces her watching the three of them will be easy. However, the three of them quickly show her that they already know how to fly too and fly around the room chewing everything, upsetting Isabel. Seeing this, Mingo goes "Mommy" again and indicted his mouth with his paw to tell her they are hungry. Understanding his needs, Isabel tells them their parents are getting them anoki berries.

At that moment, Zoom opens the door and flies off to get some food. Isabel goes after him with Mingo going after her. When Isabel discovers him, she slaps a tray cover over Mingo and takes him back to her room. Isabel finally nabs Zoom and takes him back to her room only for Estrella to get out. Isabel puts Mingo and Zoom behind a caged door as Skylar and Luna arrive. Upon realizing they're getting cranky from hunger, the pair fly off to find anoki berries too while Isabel goes to get Estrella back. Meanwhile, Estrella enters Mateo's workshop and makes herself a giant with an Enlarging Potion. Because of Estrella's size, Isabel fails to stop her and Mingo and Zoom get loose again. The three Jaquins take bites out of all the food they can only to spit it back out as none of it is anoki berries. They then fly off to find anoki berries.

Suddenly, Skylar, Luna, Elena, and Isabel fly up with a giant anoki berry and lead them back to Avalor Palace, where Mateo gets Estrella to eat a Reversal Potion and return to normal. The three baby Jaquins then help themselves to the giant Anoki Berry as their parents show up. Mingo finally realizes that Dulce is his mother. Dulce names Estrella, Migs names Zoom for his speed, and Isabel names Mingo since he likes her a lot.

The cubs are seen again in "A Spy in the Palace", watching their father perform for an upcoming flyover that he will be performing during the Jaquin Festival with Luna and Skylar. However, once they finish their rehearsal, the cubs don't seem that all interested. Princess Isabel tries to spruce it up with her latest invention, but when Migs sees Luna and Skylar messing around with the devices, he decides not to perform with them. Only when Isabel reminds him that he will be letting Mingo, Zoom, and Estrella down if he doesn't participate, does Migs change his mind, and once they perform their flyover, the cubs are very proud of their dad. None of them are aware that Carla Delgado is with Elena and Naomi, disguised as "Rita Perez" as part of a plan to attain Queen Lucia's Carnaval Tiara for Shuriki.

In "Shapeshifters", with Shuriki's return now public knowledge, Mingo, Zoom, and Estrella have been informed as well. They and their father Migs visit Elena to tell her that they are going to Luna's birthday party and hope she can attend, but Elena reveals she's been confined to the Royal Palace until further notice. Migs assures her that Chief Zephyr has the Jaquins looking for Shuriki non-stop, and when his cubs offer their support as well with being future Guardians themselves, Elena shares a special Future Guardian Salute with them before they take off with Migs. Later on, after Elena, Gabe, and Mateo are wrongfully accused of Zephyr's disappearance by Cruz and locked up by the other Jaquins, Mingo, Zoom, and Estrella are acting as the sentries for the cell when Elena gets their attention. However, they also believe Cruz's lies, until Elena demonstrates their secret Future Guardian Salute to them. After a small huddle with each other, the cubs are convinced Elena is Elena and let her, Gabe, and Mateo out. When Migs, Luna, Skylar, and Cruz discover this, the cubs guiltily point out which way Elena and the others went. When Cruz is exposed and apprehended by Elena and Zephyr, the cubs act as sentries for Cruz after he is locked up as they are watched by Zephyr, Elena, Gabe, and Mateo.

Mingo, Zoom, and Estrella star alongside Princess Elena and Princess Isabel in the Adventures in Vallestrella shorts. 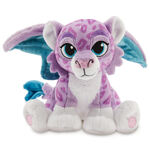 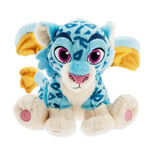