Magica De Spell (aunt)
Minima De Spell is Magica De Spell's niece. She made her first appearance in the DuckTales comic Dime After Dime. She is notable among the characters created for the original DuckTales in that, despite only appearing in a single comic based on the show (and not in any episodes of the show itself), she would become a regularly recurring character in Magica-centric comic stories published in Italy. 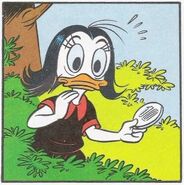 Minima had the Number One Dime

Minima and her family in The Great Rock of Power-Plus!