Minnie's House is an attraction located at Disneyland and Tokyo Disneyland in the themed land Mickey's Toontown. It is a walk-through attraction with occasional meet-and-greet opportunities with Minnie Mouse. Originally meant for the parks, the home also made way to various Disney material including film, television, video games and more. The version in Walt Disney World (at Mickey's Toontown Fair) was closed and demolished to make way for Storybook Circus.

The walk-through attraction has been featured as Minnie's official home in the television series Mickey Mouse Works and House of Mouse. It is also featured in the film Mickey's Twice Upon a Christmas.

In video games, the home can be toured in the game Mickey Saves the Day 3D Adventure. According to that game, Minnie designed the house herself, even picking out the paint used for it.

In Epic Mickey, the home is featured in OsTown, but as the home of Ortensia instead. 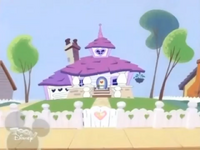 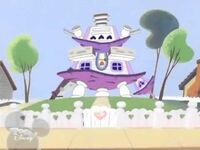 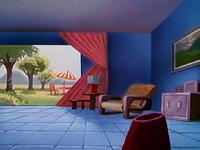 Minnie's house as seen in Pluto and the Gopher 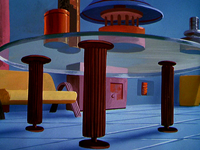 Minnie's living room as seen in Pluto and the Gopher 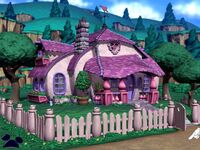 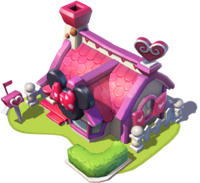 in Disney Magic Kingdoms
Add a photo to this gallery

Retrieved from "https://disney.fandom.com/wiki/Minnie%27s_House?oldid=4115584"
Community content is available under CC-BY-SA unless otherwise noted.