February 14, 2014
"Minnie-Rella" is the ninth episode of the fourth season of Mickey Mouse Clubhouse. As the title suggests, it is based on the story of Cinderella with Minnie Mouse as the title character.

Minnie falls asleep while doing chores and dreams that she becomes Minnie-rella!

Prince Mickey welcomes everyone to his castle.

May I have this dance?

Prince Mickey and Minnie-rella dancing together

Oh no! She lost her slipper!

Prince Mickey and Minnie-rella with her glass slipper

Putting on the Glass Slipper

Minnie gesturing her feet. Her right foot is in the glass slipper

Prince Mickey and Princess Minnie-rella will live happily ever after

Cover to the book adaptation 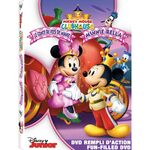 DVD with Castle Pop Up Set

Toodles and Quoodles sharing a dance