To become ruler of the Kingdom of Narnia

Losing his power and wealth
Getting injured or hurt
Losing

Betrayed by Sopespian
King Miraz (reign: Narnian-years 2290—2303) was the main antagonist in Chronicles of Narnia: Prince Caspian and unrightful ruler of the Kingdom of Narnia, reigning during the revisit of the Pevensie children and the second conquest of Narnia, the conquerors being the Telmarines, who captured the anarchy-ridden land after the disappearance of the Pevensies.

Despite his antagonistic ways, he is still human. He is still doing what is best for his family line.

Miraz was the younger brother of Caspian IX, the king of Telmarine-Narnia and father of Caspian X. Miraz murdered his brother to take control of the throne (it is implied later on that the method in which he murdered Caspian IX was via poisoning him, as he claimed that the latter died in his sleep, and when his wife confronted him on this when his nephew exposed the truth, he claimed that it was true to a certain extent). He let his nephew live because at the time, he had no heir himself.

He had a nurse raise Caspian in his early years, but dismissed her because Caspian unwittingly told him she was telling him stories of Narnia before the Telmarines invaded the country. He had a doctor named Doctor Cornelius teach Caspian from that point on. What Miraz didn't know was that Cornelius was actually half-dwarf, and was also telling Caspian about the Old days of Narnia.

Miraz's wife, Queen Prunaprismia, eventually gave birth to a son when Caspian was a young man. No longer needing Caspian, he planned to have him killed. But Caspian had been warned about this by Dr.Cornelius and fled for his life. While on the run, he met with the Old Narnians and promised to lead them in an attempt to overthrow Miraz and restore freedom to Narnia. Miraz learned of this, and sent armies forth to quell his nephew and his army of Old Narnians during their revolution. During this time, the four Pevensies returned to Narnia (due to Caspian blowing Susan Pevensie's Horn), and they allied with Caspian. Miraz's dueled against Peter Pevensie before the Second Battle of Beruna. During this time, one of his own lords, Sopespian, stealthily assassinated him and blamed it on the Narnians.

Miraz was an arrogant, bloodthirsty, cruel, cowardly, greedy, jealous, power-hungry, sadistic, treacherous, vengeful, vile and violent man. He was willing to betray and kill his own brother to take the throne, and was only willing to let Caspian take his place as king as long as he had no other heir. 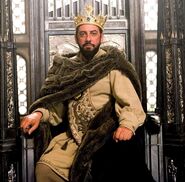 Retrieved from "https://disney.fandom.com/wiki/Miraz?oldid=4110916"
Community content is available under CC-BY-SA unless otherwise noted.