2
Miriam Flynn is an American actress and voice actress who is best known as Cousin Catherine in the National Lampoon's Vacation and Grandma Longneck in the Land Before Time franchises. She is also known for acting in other films and several television series, the latter including a recurring role as Sister Helen on the Fox/WB sitcom Grounded for Life. 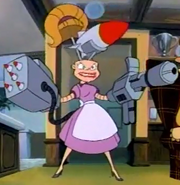 Mrs. Roborson
(Quack Pack)
Add a photo to this gallery
Retrieved from "https://disney.fandom.com/wiki/Miriam_Flynn?oldid=3854120"
Community content is available under CC-BY-SA unless otherwise noted.