Luke: "You went straight to the dark."
Rey: "That place was trying to show me something."
Luke: "It offered something you needed. And you didn't even try to stop yourself."
―Rey and Luke Skywalker[src]

The mirror cave is a mysterious cave located on the Temple island of Ahch-To that has a strong connection to the dark side of the Force and is the place Rey explores to find answers about her parents in Star Wars: The Last Jedi.

The mirror cave is a dark side vergence, a natural convergence of energy. It is a place full of mirrors that creates endless reflections and is in the underground of Temple island. A blowhole covered by black vines situated on its ceiling is the entrance that is currently known.

At the time she is visiting the Temple island, Rey meditates during her first lesson about the Force with the Jedi Master Luke Skywalker. She called by the dark side of the island that tempts and tries to show something to her. Luke becomes disturbed by this, he reprimands Rey for going into the dark without hesitating, reminding what happened to his nephew, Ben Solo, who has a similar raw strength in the Force.

Sometime later, Rey and Kylo Ren argue through their Force-bond about her being unable to let go of her past and her parents. Instigated by this, Rey decides to explore the dark place that called her during her meditation, hoping to find answers. She enters a hole on the ground and falls underwater inside a lake in the mirror cave. She sees innumerous versions of herself reflected on the mirrors of the cave. She touches a mirror and asks the cave to show her parents. Rey sees two shadow figures in the mirror walking towards her, as they approach, they merge and become only one figure and then the shadow figure turns into her own reflection.

Rey leaves the cave completely disappointed for not finding the answers she expected, feeling more alone than ever. Right after, she seeks comfort in Kylo Ren and tells him everything that happened in the cave, thinking that he is the person that would be able to understand her feelings after this event. 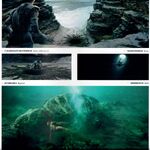 Rey underwater of the mirror cave.

Rey inside the mirror cave.

Rey and Kylo Ren's reflection in the mirror cave.

Rey seeing the reflections of Kylo and Obi-Wan in the mirror of the cave.

Rey seeing Kylo and Obi-Wan inside the mirror cave.

The blowhole in the ceiling of the mirror cave.

Rey asks the cave to show her parents, but she ends up seeing her own reflection in the mirror.