Miss Adventure Falls is a raft ride at Typhoon Lagoon at Walt Disney World Resort. Clocking in at two-minutes, it is one of the longest rides in a Florida water park.

Miss Adventure Falls was first announced as Miss Fortune Falls on August 2, 2016, as part of a two-acre expansion to the park. Centered on Mary Oceaneer, a character created for the Disney Cruise Line, it would be the first Society of Explorers and Adventurers attraction (not including retroactive additions) to debut in an American Disney theme park. It would also be the first water park attraction to incorporate an animatronic figure in the form of Duncan, Mary's parrot companion.

The attraction officially opened on March 12, 2017.

“Captain Mary and her parrot dove for treasure hoping to share it. As they were hauling their riches to port, a typhoon struck and cut their trip short!”
―Queue signage poem

Miss Adventure Falls is themed as a shipwreck site of the M.S. Salty IV, Captain Mary Oceaneer's ship. Cargo and oceanography equipment are scattered around the queue, including crates, Oceaneer's diving bell, frames containing a map of Blustery Bay (Typhoon Lagoon's greater area) and a magazine cover featuring Oceaneer and Duncan, and some beach chairs for Oceaneer and Duncan.

Guests are loaded onto "Treasure rafts" and after a safety spiel from Oceaneer, are taken up a lifthill up into the canopy of the tropical forest. Going past the wreckage of Mary's ship, an opening in the hull reveals a cabin full of treasure where Duncan has set up a spyglass to try and find treasure and a lost supply of his crackers. Going past the ship's salvage crane, still containing a chest, the rafts enter the first of two enclosed tubes. Along the twisting flume path are a great stone head stuck in a tree and an Aztec statue of a water carrier that drops seemingly endless flows onto the guests before the rafts finally make their splashdown back to the base camp. 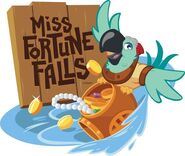 Overview Concept Art
Add a photo to this gallery

Retrieved from "https://disney.fandom.com/wiki/Miss_Adventure_Falls?oldid=3624673"
Community content is available under CC-BY-SA unless otherwise noted.