The Diva of Demolition
The School Bus of Death

“Fritter's the name, and me and the Crazy 8's have some unfinished business with ol' Lightning McQueen.”
―Miss Fritter[src]

Miss Fritter is a character in the 2017 Disney/Pixar animated film, Cars 3.

Miss Fritter loves the smash-and-crash life of demolition derby. A local legend at the Thunder Hollow Speedway, Fritter's formidable school-bus-size is intimidating, but it's her smoke stacks of doom, razor-sharp stop sign and crazy collection of her victims' license plates that usually steers her opponents in the other direction.[2]

Miss Fritter has the bodywork of a yellow school bus but has bigger tires that all have the shapes of two wrenches spray-painted on them. She has blue eyes, two large exhaust pipes which resemble horns that shoot out streams of flame when she revs her engine and charges, chains going through her hood and fenders, a circular saw blade painted red with the word "stop" in capitals, and several symbols painted on her sides (including the number "58"). She even has a smaller tooth between her front teeth. She used to be part of a school district called the "Lower Bellvelle County Unified School District."

Miss Fritter competes in a demolition derby at the Thunder Hollow Speedway, when Lightning McQueen and Cruz Ramirez visit there. She is later seen watching the Florida 500 on a television.

Miss Fritter is a playable character in the game.

Miss Fritter appears at the end of the show as she rams Chick Hicks away for cheating in the race between him and Lightning. 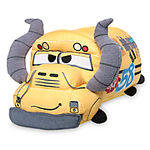 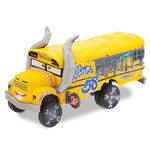