Professional dancer at the Rat Trap

Unnamed Twin Sisters
Miss Kitty is a white mouse who has a brief role in The Great Mouse Detective.

Miss Kitty is a tall, slender mouse. She has snow-white fur, a slender figure, a maroon nose, large blue eyes with lavender eye-shadow, and red lipstick.

The initial outfit she wears consists of a navy-blue dress with a lighter blue V-shaped bodice, a powder blue underskirt, a short, fuchsia cape, cobalt blue high-heel pumps, and a matching bow in her hair on the back of her head.

Her dancer outfit consists of a sky-blue tight-suit with an exposed back and cleavage, a powder-blue, skirt-like garment, a frilled garter-belt on her right thigh, midnight-blue opera gloves, and her high heels.

Miss Kitty is brought on by the Rat Trap's pianist to calm the crowd with her song "Let Me Be Good to You" when they prepare to riot. She starts off by singing softly, calming them, and even Dawson is attracted to her act. Only Basil pays no attention as he notices the bartender drugging his and Dawson's drinks while keeping an eye out for Fidget.

Miss Kitty's song rapidly degenerates into a burlesque act with backup dancers while patrons grab fruitlessly at her. She never misses a step, kicking a couple of patrons off stage. Dawson, in a drugged state, has wound up on stage dancing with the backup dancers, much to Basil's annoyance, before passing out as they look on horrified, and breaking the pianist's piano just as the song ends.

This results in a typical bar fight breaking out, with shots fired and some swinging on chandeliers. Fortunately, our heroes avoid swinging fists or flying chairs and slip out unnoticed through a trap door.

Kitty in her dancer outfit

The patrons seem hypnotized by Kitty's beauty and dancing

Kitty with her twin sisters

Kitty pushing a patron who tried to grab her whilst dancing.

Kitty spins with a drunk Dawson

Kitty in her showgirl outfit 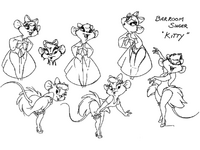 Retrieved from "https://disney.fandom.com/wiki/Miss_Kitty?oldid=4441229"
Community content is available under CC-BY-SA unless otherwise noted.