Citadel at the End of Time

Manners, the TVA, having a tidy timeline, He Who Remains

Loki's bad manners, people interfering with the TVA's work and messing the timeline

He Who Remains † (creator)

“Welcome to the Time Variance Authority. I'm Miss Minutes, and it's my job to catch you up before you stand trial for your crimes.”
―Miss Minutes[src]

Miss Minutes is a character from the Disney+ series Loki. Miss Minutes is an artificial intelligence created to serve the Time Variance Authority. Appearing to be simply a mascot at first, she is actually revealed to be directly working as the henchwoman of the creator and ruler of the organization, He Who Remains. Because of this, she is aware of secrets of the TVA that none of the other members besides the ruler knows.

She is played by Tara Strong.

Despite initially appearing to be only a cartoon for the TVA's instructional videos, Miss Minutes is actually a living being. She has a southern accent and appears to be a cartoon from the 80s, despite the TVA existing outside of space and time.[1]

During He Who Remains period of isolation in the Citadel at the End of Time, unbeknownst to everyone else, Miss Minutes has been in contact with him the whole time, and is the only one who he speaks with.[2]

At first glance, Miss Minutes appears to be only a cute and sympathetic cartoon who speaks with a sing-songy and sort of non-threatening voice.[2] She initially appears to be friendly to Loki and helps him during his TVA training, but also seems to value manners and becomes angry when he starts being playfully mean with her. However, Miss Minutes hides a sinister side and when she is revealed to be evil, she becomes scary. She can be very spooky as seen when she suddenly appears in front of Sylvie and Loki at the Citadel, startling the pair.

Miss Minutes has a close relationship with He Who Remains and is very protective over him. She values her role at the TVA and knows that any wrong move could lead to the end of the life in the universe.[2] Because of this, she is furious that Loki messed up the timeline. She is also angry upon seeing Sylvie and Loki show up at the Citadel. She acts as a devil on their shoulder, tempting the duo with their hearts' desires[2] and shows contempt when they reject the proposal to put them back on the timeline. Besides tempting the duo at the Citadel, her manipulative side is also shown, as she has been feeding the TVA judge, Ravonna Renslayer, with selected information.[2]

In the first episode, when Loki uses the Tesseract to escape from the Avengers after the Battle of New York, he is captured by the Time Variance Authority and watches a video narrated by Miss Minutes telling him why he was arrested. Miss Minutes explains that, a long time ago, there was a Multiversal War in which the timelines battled each other for supremacy and it only ended when the Time Keepers reorganized the Multiverse into a single timeline, the Sacred Timeline. Since then, the Time Keepers preserve the Sacred Timeline and anyone who deviates from the path dictated by them, become what they call "Variants". The actions of the Variants create nexus events that can cause the timeline to branch off countless times, which can lead to another Multiversal War. Miss Minutes continues saying that to prevent this, the Time Keepers created the TVA and all its workers to fix mistakes on the Sacred Timeline and set it back to its pretermined path. She then reveals that, upon becoming a Variant, the person loses their place on the timeline and must be judged for their crimes, so a trial will be happening soon.

In the second episode, after Loki accepted to help the TVA capture a rogue Variant of himself, he is studying to participate in the missions and is helped by Miss Minutes. She asks him what happens when a nexus event past red line, but Loki refuses to give an answer. Miss Minutes pressures him, so he replies that it is when the TVA is no longer able to reverse the nexus event. She complements by saying that this would lead to the destruction of the timeline and the collapse of the reality as they know. Loki then asks if Miss Minutes in fact alive or is a recording, she replies "sort of both", before Loki tries to hit her with the magazine he was reading. Miss Minutes tells him to stop and returns to the monitor of the computer while reprimanding Loki for his manners.

In the third episode, Miss Minutes does not make a physical appearance, but her voice is heard. After Loki used Sylvie's TemPad and teleported himself and her to Lamentis-1, Sylvie fights him and recovers her TemPad, but when she tries to teleport herself, the image of Miss Minutes appears on-screen and she announces "You're outta juice!"

In the fifth episode, when Sylvie threats Ravonna inside the Time Court, to have answers about who is behind the TVA, Ravonna requests Miss Minutes remote access to the TVA's restricted files from their archives regarding the beginning of time and the founding of the organization. While Miss Minutes is scrolling the files, Sylvie suggests that there might be a clue in at the end of time about the creator of the TVA. Upon Ravonna's request, Miss Minutes opens a file with a timeline showing the end of time, which is a part that is still not written. Sylvie deduces that the creator of the TVA is hiding beyond the Void at the end of time, where he would be undetected by the TVA because there no way to create a nexus event without a written timeline, so she asks how to get pass the Void. When Ravonna states that it is impossible to get pass the Void or go through it, Sylvie threats her again by saying that there is no need for her anymore and Miss Minutes reacts by telling a lie. Miss Minutes claims that there is a Void Spacecraft that could take them to the end of time, and Ravonna goes along with it, explaining more details of the supposed spacecraft.

Miss Minutes starts to scroll again, pretending to be looking for the file of the supposed spacecraft. Sylvie immediately realizes that they are lying, prompting her to repeatedly ask Miss Minutes for the file that she is taking so long to find. Despite this, Miss Minutes had managed to dispatch a group of Minutemen and she and Ravonna stalled for enough time for them to arrive and surround Sylvie, so Miss Minutes disappears as soon as they enter the Time Court. Later, when Ravonna is trying to figure out who is behind the TVA, she calls Miss Minutes and asks for all the files on the founding of the TVA and beginning of time again. Miss Minutes replies that it would be a very hard task, but Ravonna pressures her by stating that the creator of the TVA is in danger and that she needs to find them whoever the person is. Hearing this, Miss Minutes hesitates, then agrees to help and leaves.

“Hey, y'all!”
―Miss Minutes to Loki and Sylvie[src]

In the final episode of the season, when Loki and Sylvie arrive at the castle where the creator of the TVA lives, Miss Minutes suddenly appears and startles the duo, making them draw their swords. Miss Minutes welcomes the pair to the Citadel at the End of Time and congratulates them for getting so far. She tells them that He Who Remains, the ruler the TVA, is impressed with them. She explains that He Who Remains created all and controls everything, and is offering them a deal. She states that He Who Remains is making adjustments to reinsert them both into the timeline in a way that won't disrupt things. She then says that they could live the lives they have always wanted while the TVA continues to do its work.

Loki: "Both of us... together on the timeline?"
Miss Minutes: "It's crazy, but he could make it work. All of it. Everything. Exactly the way you've always wanted. And you can have it all, together."
Sylvie: "It's fiction."
Loki: "We write our own destiny now. "
Miss Minutes: "Sure you do. Good luck with that."
―Loki, Miss Minutes, and Sylvie[src]

Miss Minutes tells Loki that he could win the Battle of New York, kill Thanos, have the Infinity Gauntlet and the throne of Asgard. To Sylvie, Miss Minutes states that she could stop being on the run and wake up with a lifetime of happy memories. She then offers to put them together on the Sacred Timeline, which makes the pair hesitate and Loki questions Miss Minutes, wondering if this would really be possible. Miss Minutes states that He Who Remains could make it work for them to have anything they ever wanted and be together. Despite their hesitation, the pair ultimately refuses the offer. Sylvie states that this would be a fiction and Loki agrees by saying that they are the ones who write their own destiny now. With this, Miss Minutes mischievously smiles and sarcastically wishes them "good luck" in trying to do it by themselves before disappearing, leaving Loki and Sylvie to continue to explore the Citadel. 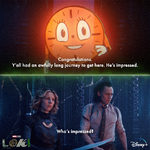 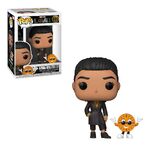