The original character from Marvel Comics

Reconstructing crime scenes just by looking at evidence of them

“I know this place, I know the players, and I can make a difference here.”
―Misty Knight to Gabe Krasner

Detective Mercedes "Misty" Knight is a superheroine from Marvel Comics. She is commonly an ally of street-level superheroes, notably Power Man. She appears as a central character in the Netflix TV series Luke Cage and a supporting character in the subsequent miniseries The Defenders.

She is a police officer investigating the gangs of Harlem lead by Cottonmouth. As a police officer, she is also able to carefully recreate and reconstruct the crime scene to deduce how the crime took place and find the suspect. After losing her arm in the line of duty, she received a cybernetic arm to continue her job.

Misty and Luke after the shooting of Pop's Barber Shop 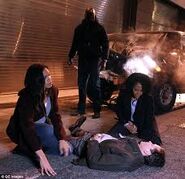 Misty and the others watch as Scarfe dies