The Castle of Illusion

Witchcraft, dark magic, shape-shifting
Mizrabel (a pun on "miserable") is the main antagonist of the video game Castle of Illusion starring Mickey Mouse and its remake. In the game's story, she kidnaps Minnie Mouse in an attempt to drain away her youth, beauty and life force as well as assume her physical shape. As a result, Mickey Mouse has to venture through her castle to rescue Minnie and save her from death. She later returned as the main antagonist of Epic Mickey: Power of Illusion. In that game, she was sent to Wasteland (due to her becoming a forgotten character, along with the Castle of Illusion game) and ended up kidnapping other still-popular characters so she could steal their hearts and escape from Wasteland.

In Castle of Illusion, Mizrabel notably bears some resemblance to the Evil Queen, both in her Queen form and in her Hag form. In Power of Illusion, she is shown shape-shifting into various Disney villains before settling on taking the form of Maleficent from Sleeping Beauty.

In the Castle of Illusion remake, her true form appears to be a combination of the Queen and Maleficent; she wears a dress similar to that of the Queen's as well as a robe and a crown, but her face bears much greater resemblance to Maleficent's and has her skin color. Also, her cape, though it connects to the sleeves like the Queen's, is ragged and torn like Maleficent's.

At the end of both versions of Castle of Illusion, Mizrabel reforms after she is defeated by Mickey Mouse (in the remake, it is explained as her learning that Mickey had a far greater magic, which turns out to be the magic of love; Mickey's love for Minnie gives him the strength and courage to go and save her). 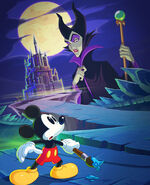 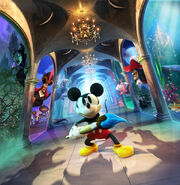 Mickey battling Mizrabel at the end of Castle of Illusion. 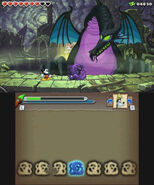 Mizrabel in the form of Dragon Maleficent in Epic Mickey: Power of Illusion.