Disney Wiki
Register
Don't have an account?
Sign In
Advertisement
in: Objects, The Avengers, Weapons,
and 22 more

Team Thor
Team Thor: Part 2
The Simpsons: The Good, the Bart, and the Loki

Mjölnir (also known as Thor's Hammer or simply The Mystical Hammer) is the primary weapon of Thor, the Asgardian God of Thunder. It is an enchanted hammer of tremendous power that grants Thor the ability to fly and summon lightning against foes. It was Thor's main weapon until its destruction at the hands of the Hela, the goddess of death and Thor's sister. Mjölnir's name derives from Old Norse and means "The Crusher".

Mjölnir was forged in the heart of a dying star by dwarves. With it, Thor can harness the power of lightning bolts, and fly. Only those individuals that are worthy of the power of Thor can lift Mjolnir, as Hulk discovered he couldn't lift it; this spell was placed upon it by Odin himself when he punished Thor with banishment to teach him a lesson. On the side of the hammer, there is an inscription engraved "Whosoever holds this hammer, if he be worthy, shall possess the power of Thor..."

Thor's mystical hammer Mjölnir has a number of elemental powers. It has been stated be Odin himself that Mjölnir's power has no equal. Mjölnir itself is extremely durable like the Earth metal Adamantium, and combined with the various enchantments placed upon it by Odin, it is, for all intents and purposes, indestructible. It has deflected three blasts from the Destroyer (which was able to disintegrate anything that it hit) and return the blast back into the Destroyer. Thor often uses the hammer as a physical weapon, with almost nothing being capable of withstanding a hammer blow or throw. A few examples of the abilities Thor has shown with Mjölnir :

In the post-credit scene of Iron Man 2, Phil Coulson spots Mjölnir and then goes on the phone saying "We found it sir" in New Mexico.

In Thor, Mjölnir is passed down to Thor Odinson after his recklessness.

Thor uses Mjölnir against Captain America and Iron Man and it proves unable to break Captain America's vibranium shield. When Hulk rampages through the helicarrier, Thor seeks to defeat him. During this fight, Hulk attempts to lift Mjölnir but is unworthy, therefore making Mjölnir one of the only objects the Hulk cannot lift. Thor uses Mjölnir to great effect during the Chitauri invasion.

Thor used Mjölnir to defeat a Marauder, which meant the surrender of all the Marauders. Also used it to attack Malekith, after Algrim killed his mother. In Svartalfheim, Thor tried to destroy the Aether with the power of Mjolnir but it didn't work.

Thor used it to defeat several HYDRA soldiers. In a moment of battle against HYDRA, he hit Captain America's Shield with Mjölnir causing an explosion of sound. Thor defies his friends to lift Mjölnir; Bruce Banner, Tony, and Rhodes first try but none can, then tries Rogers, who manages slip it a little. In truth, Rogers was deemed worthy but chose not to lift it to save Thor the embarrassment while the latter becomes suspicious of Rogers. The challenge ends abruptly with the appearance of Ultron. Later, Vision was able to lift it, proving himself worthy to everyone. Vision would later use it against Ultron. Thor then uses it in the Battle of Sokovia, after the defeat of Ultron Thor uses Mjölnir to return to Asgard.

Thor attacks Hela with Mjölnir, but Hela, much to the surprise of everyone, simply grabs Mjölnir and destroys it by crushing it.

When an overweight Thor and Rocket Raccoon travel back in time to Asgard during the events of The Dark World, after Rocket extracted the Infinity Stone from Jane and while Thor was having a conversation with his mother Frigga, he summons Mjölnir far from Asgard. After he said he was still worthy, he said goodbye to his mother before he and Rocket travel back to 2023.

It was later seen when Thor, Iron Man, and Captain America face off against the 2014 version of Thanos after the New Avengers Facility was destroyed by the Sanctuary II, which was also brought to 2023 by that year's version of Nebula. Thor used both the hammer and Stormbreaker, the axe made by Eitri with the help of Thor and Groot at Nidavellir in Avengers: Infinity War, to power up Iron Man's blasters before Thor used his weapons against Thanos. During the battle, Thor was knocked out by Thanos, dropping the hammer. Later, the hammer floats and hits Thanos before getting wielded by Captain America, making him worthy of the hammer. Seeing this, Thor proclaimed he knew Rogers was worthy. Rogers used it against Thanos along with with his shield.

In the final battle, when a resurrected Doctor Strange summons portals for every hero, including the other resurrected heroes and excluding Black Widow, who died earlier in the film at Vormir, and Captain Marvel, who didn't arrive until later in the battle, to arrive at the ruins of the Facility in the climatic battle against Thanos and his army, Captain America was seen wielding Mjölnir when he said "Avengers..... Assemble!" The hammer was briefly wielded by Thor before handing it over to Captain America after the latter summoned Stormbreaker while the former took the axe.

During the battle, while Spider-Man activated his instant kill mode from the suit and battling some of Thanos' army, he got surrounded by them and calls someone for help. Captain America then throws Mjölnir and Spider-Man shoots a web to it, escaping from the creatures and flying with it before the web gets shot off by the Sanctuary II's blasters, making him fall before being saved by Pepper Potts, who has been equipped with a new armor made by Tony.

Thor then duel-wielded the hammer and axe against Thanos when the Titan was about to grab the Power Gauntlet. Captain America helped bring Thanos to Thor's weapons before both Thor and Captain America got knocked out.

After the battle and a funeral which was held for Tony, who sacrificed himself to defeat Thanos and his army earlier, Steve Rogers time-traveled to bring back the Infinity Stones and Mjölnir to their proper timelines before staying in the past to live his life with Peggy Carter.

In the fifth episode, Mjölnir is briefly seen in the Void near Throg, a frog Variant of Thor, when Loki follows the Variants of himself to their underground hideout. 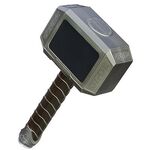 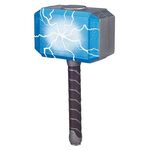 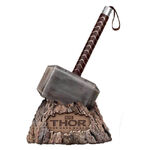 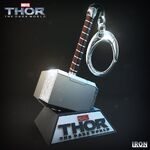 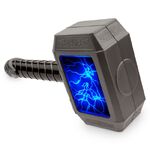 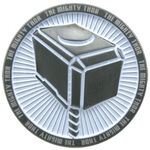 Mjolnir in Thor: The Dark World