To conceal the heart of Te Fiti

Moana's necklace is what kept the heart of Te Fiti safe through out Moana and Maui's journey to return it to the Island Goddess.

It was originally Gramma Tala's and when she was laying on her death bed, she placed the heart of Te Fiti inside it before handing it to Moana. Moana put it around her neck when she realized what she must do to save her island and people, with the heart safely around the neck. It even kept it safe through out the storm that made Moana's boat crash and wash up on Maui's Island; and with Maui's attempts to throw Moana off of the boat and the Ocean helping her to get back onboard.

The Kakamora had even tried to take the necklace from Moana's neck, when they saw that the heart was inside it; the two fighting over it however did force the necklace to open and send the gem towards a rock eating rooster. When Tamatoa saw how shiny the necklace was he tried to take it, but later lost interest when Moana told the giant crab that it belonged to her grandmother and got carried away talking about himself. The reason why Moana didn't want Tomatoa to take the necklace, is because that it was the last thing that her grandmother had given her and couldn't risk the giant crab getting his pincers on the heart.

When Moana came face to face with the ghost of her ancestor, Matai Vasa, he placed his hand on the pendent of his necklace and she did the same with hers. Which could mean that necklaces like theirs are wore by Wayfinders that are the leaders of their own voyage and fellow voyagers.

The Heart of Te Fiti being placed in it

The Heart still safe inside the necklace after the storm, to Moana's relief

The size of both the necklace and the gem

A Kakamora trying to take the necklace, so it could steal the heart

The necklace in the end credits 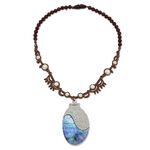 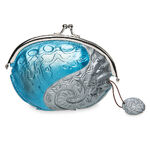 Coin Purse of the necklace's pendant 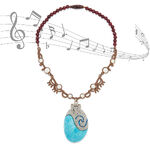 Concept Art of the necklace 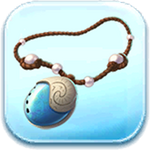 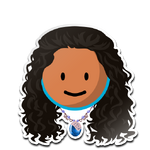 Retrieved from "https://disney.fandom.com/wiki/Moana%27s_Necklace?oldid=3629230"
Community content is available under CC-BY-SA unless otherwise noted.