Studying Grogu's blood, planning to taking over the Galactic Empire

Arrested
Moff Gideon is the main antagonist in the 2019 Disney+ original series, The Mandalorian.

Moff Gideon served as an officer in the Imperial Security Bureau, a law enforcement and an agency of the Galactic Empire. Following the Galactic Civil War he was thought to have been executed for committing a number of war crimes, but was found to have faked his own death and secretly built a small Imperial army after its downfall. Shortly after the war, Gideon stole the legendary Mandalorian lightsaber known as the Darksaber from its rightful owner, Bo-Katan Kryze, and oversaw the Great Purge, an Imperial attack on Mandalore that rendered the planet uninhabitable and led to the death of nearly all of its inhabitants.

Moff Gideon was cold, calculating, and brutal where he executed one of his men for unintentionally interrupting him. Gideon was also extremely intelligent where he was able to figure what moves his enemies would make before or after confronting them. Gideon also took the habit of studying the background of his enemies before getting to meet them in person.

After the destruction of the second Death Star, Gideon eventually began to take part in the Imperial remnants’ attempts to create clones that could be engineered to have Force powers. To achieve this end, he sought to obtain the Force-sensitive infant known as Grogu so that he could use the child’s blood, which had an extremely high concentration of midichlorians (the microscopic bacteria that give individuals the ability to use the Force).

Gideon demanded Grogu to be brought back alive and ordered cloning scientist Dr. Pershing and an ex-Imperial warlord known only as The Client to place a bounty on him. The bounty was collected on by Mandalorian bounty hunter Din Djarin, but the Mandalorian had a change of heart and took Grogu back, acting has his father.

This turn of events angered Gideon, who started overseeing the development of a third generation of Dark Troopers, which began as a heavy stormtrooper suit until the human was removed entirely. When Djarin eventually returned to his home planet of Nevarro to free it from Gideon’s remnant’s occupation, Gideon became personally involved.

Djarin and his allies Cara Dune and Greef Karga attempt to kill the Client by pretending to bring Grogu back to him. Gideon, realizing this is a trap, orders his Death Troopers to shoot through the window in an effort to kill them all, but they only manage to kill the Client and his stormtroopers. Gideon then arrives and threatens Djarin, knowing that Djarin’s friend Kuiil actually has Grogu. After his scout troopers kill Kuiil and kidnap Grogu, the heroes’ ally IG-11 takes the child back and regroups with the others, starting a large fight between the ragtag group and Gideon’s army. They manage to escape through the sewers after Gideon causes an explosion that injures Djarin, but after emerging from the sewers they are ambushed by Gideon in his TIE fighter. Djarin jumps onto the side of the fighter and manages to disable it, causing it to crash with Gideon still inside. Believing Gideon to be dead, the group goes their separate ways, with Djarin resolving to return Grogu to the Jedi. Unknown to all of them, Gideon survives and cuts himself out of the wreckage with the Darksaber.

Much later on Trask, Djarin helps Bo-Katan and her crew hijack an Imperial freighter. The captain tells Gideon that the cruiser has been compromised, so Gideon orders the captain to kill the crew and crash the ship to prevent it from falling into enemy hands. Bo-Katan interrogates the captain for Gideon’s location, but he kills himself to avoid Gideon’s wrath. Bo tells Djarin to seek out her old Jedi friend Ahsoka Tano on Corvus and takes the ship to start building an army to retake Mandalore.

After briefly returning to Nevarro for repairs to his ship, Djarin helps Karga and Dune destroy the planet’s last Imperial base. Inside, they find several dead clone bodies in tubes and a hologram message from Dr. Pershing to Gideon. Pershing’s message states that Grogu’s blood is rich with midichlorians and he needs access to it again to create Force-sensitive clones. Realizing that Gideon is alive, Djarin, Dune, and Karga destroy the base and Djarin leaves to continue his search for Ahsoka. Unknown to Djarin and Karga, one of Karga’s mechanics who repaired Djarin’s ship is a spy for Gideon. He contacts Gideon’s ship and tells the crew that he has installed a tracker on the Razor Crest. The captain informs Gideon, who prepares his Dark Troopers for combat.

Gideon tracks Djarin and Grogu to the planet Tython and sends a regiment of stormtroopers to capture Grogu. Djarin and his allies Boba Fett and Fennec Shand hold off the stormtroopers, and Fett destroys their transports as they retreat. In retaliation, Gideon destroys the Razor Crest from orbit, leaving nothing behind except the beskar spear that Djarin received from Ahsoka, and sends the Dark Troopers to kidnap the child. Aboard Gideon’s cruiser, he enters Grogu’s prison cell and finds him torturing two stormtroopers. He shows Grogu the Darksaber, telling him he is not ready for a lightsaber, before having his stormtroopers stun Grogu unconscious and handcuff him.

Din finds Gideon’s coordinates with the help of ex-Imperial sharpshooter Migs Mayfeld. He then sends a message to Gideon, turning Gideon’s previous threat back at him word-for-word.

After hijacking Dr. Pershing’s shuttle, Djarin assembles a rescue team consisting of Boba Fett, Cara, Fennec, Bo-Katan, and Bo’s partner Koska Reeves. Pershing agrees to give them the intel they need to board Gideon’s cruiser, and Djarin splits up from the rest of the group to find Grogu. He finds Gideon in Grogu’s cell, and Gideon claims that he only wanted to study Grogu’s blood. He agrees to let Djarin take the baby and leave, but this is a trap and he tries to kill Djarin when his back is turned. This leads to a tense lightsaber duel which ends with Djarin disarming and capturing Gideon. Both Gideon and Bo-Katan tell him that this makes him the Darksaber’s rightful owner. Djarin attempts to surrender the weapon to Bo-Katan, as the plan was for her to kill Gideon and take the Darksaber. However, Gideon and Bo explain that the weapon must be won in a duel.

The discussion is interrupted when the Dark Troopers head to the ship’s bridge. Gideon hides a pistol under his cape while the heroes are distracted and the Dark Troopers attempt to punch through the doors. The ship is then boarded by an X-Wing, the pilot of which is a Jedi who fights all of the Dark Troopers on his own. Gideon, absolutely terrified, knows the Jedi could only be Luke Skywalker. In a last-ditch effort to claim victory, Gideon pulls out the pistol and shoots Bo-Katan, but she survives with only light wounds. He then tries to kill Grogu, but Djarin blocks the shots, which do nothing to him.

Defeated, Gideon points the gun to his head and tries to commit suicide, but Cara stops him and knocks him unconscious. After the skirmish, he is taken prisoner by the New Republic.

Moff Gideon speaking to the Client before killing him.

Gideon with the Darksaber. 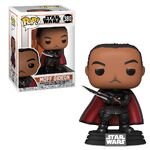 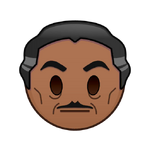 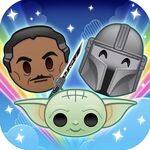