2005-present
Moisés Arias is an American actor on Disney Channel. He plays Rico Suave in Hannah Montana, as well as Randall in The Suite Life of Zack 7 Cody. He was on the Red team in the Disney Channel Games for two seasons, then switched to the Yellow Team (Comets) in 2008.

He is also the older brother of Mateo Arias, who is known for portraying Jerry Martinez in the Disney XD series Kickin' It. He appeared in Wizards of Waverly Place, where he played Max (Jake T. Austin)'s conscience. He also played Luca in The Good Doctor. 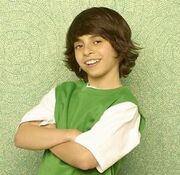 Rico Suave
(Hannah Montana)
Add a photo to this gallery 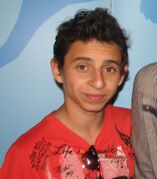 Moises Arias attending the 69th annual Berlinale International Film Fest in February 2019.
Add a photo to this gallery
Retrieved from "https://disney.fandom.com/wiki/Mois%C3%A9s_Arias?oldid=4076189"
Community content is available under CC-BY-SA unless otherwise noted.