Stella and Nolan
Molly Helen Shannon is an American actress, voice actress, and comedian best known for her work throughout her career, where she has appeared in a number of films in supporting roles. She is best known for her appearance as a cast member on Saturday Night Live from 1995 to 2001, and known for her character, Mary Katherine Gallagher, and in the 1999 film, Superstar.

For Disney, she portrayed Tracy in The Santa Clause 2, and Mrs. Eulalie Mackecknie Shinn in The Music Man. She also voiced Molly in Air Bud: World Pup, Air Buddies, and Snow Buddies. In 2013, she portrayed Colonel Beverly Shannon in the television series Jessie. She even played Woman in the ABC TV show, Ellen, and Denise Lemmon in the NBC/ABC TV show, Scrubs. She even voiced Rita the Cheetah in Doc McStuffins. 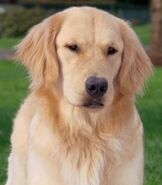 Rita Cheetah
(Doc McStuffins)
Add a photo to this gallery 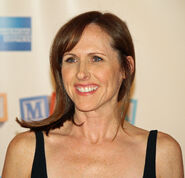 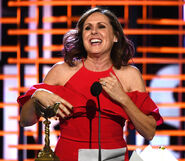 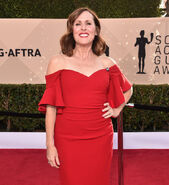 Molly Shannon arrives at the 24th annual Screen Actors Guild Awards in January 2018.
Add a photo to this gallery
Retrieved from "https://disney.fandom.com/wiki/Molly_Shannon?oldid=3898905"
Community content is available under CC-BY-SA unless otherwise noted.