Food, telling the story of how Hopper was almost eaten, the circus

Hopper mistreating him, the ants rebelling

Hopper † (older brother)
Molt is a major antagonist of Disney•Pixar's 1998 film A Bug's Life. He is Hopper's younger brother and a member of the grasshoppers.

Molt is Hopper's younger brother and the self-proclaimed Vice President of the grasshopper gang - although nobody believes that but him. Fat, gullible, a bit stupid, and loud-mouthed, but essentially good-hearted and honest, Molt got his name due to the fact that his chitlin armor molts off in flakes. He regularly infuriates Hopper to the point that Hopper told Molt early in the film that if he hadn't promised their Mother on her deathbed that he wouldn't kill Molt, he would do so.

Molt often tries to be scary, but he's never taken seriously, partly because he is so submissive to the genuinely terrifying Hopper.

When the grasshoppers first invade Ant Island, Molt interrupts Hopper's threatening speech to Atta, loudly telling everybody about a blue jay that once nearly ate Hopper. Infuriated, Hopper memorably tells Molt that if their mother hadn't made him promise on her deathbed never to kill Molt, he would kill him. He then forbids Molt to talk for the remainder of their visit and vents his rage by decking another grasshopper. Shortly afterward, the grasshoppers leave.

Later back at the grasshopper headquarters, Molt's "friends" Axel and Loco tell him that it's pointless going back to Ant Island. When Molt agrees, they convince him to put the idea to Hopper as his own, in the hope that if Hopper doesn't like it, then at least Molt will be the one who suffers his wrath. When the idea infuriates Hopper, Molt frantically admits it wasn't his idea, and that Axel and Loco suggested it. Realizing there is dissent in his gang, Hopper buries Axel and Loco in a pile of grains to point out the possible danger of the ants before heading with the rest of the gang back to Ant Island.

Near the end of the film, Molt is seen eating, enjoying, and encouraging the circus. As Thumper is beating up Flik because he was responsible for the model bird, Molt is horrified, unlike the other grasshoppers. When the ants charge at the grasshoppers, Molt sheds his peeling skin all at once in fright at the mass of ants, charging at his fellow grasshoppers, but rather than fleeing the island and abandoning Hopper like the others, he runs and hides in the grass.

Molt survives the ants' rebellion, and in the end, he joins P.T. Flea's circus as a strongman, with a new nickname: "Tiny." When he climbs into the circus wagon, Molt expresses his thankfulness towards Flik for giving him a fresh start, until Manny and Gypsy close the wagon with Molt saying, "Shutting up," one last time.

"Why go back to Ant Island at all? I mean, you don't even like grain."

"You're right! I didn't think it was such good idea myself!"

"Actually, it wasn't even my idea! It was Axel and Loco's!"

"They talked fancy to me! I GOT CONFUSED!"

"He's quite the motivational speaker, isn't he?"

"Do what he says! You don't wanna make him mad! Believe me!"

Even Molt cringes as Thumper mercilessly beats Flik up.

Molt leaps out of his skin--literally! 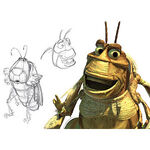