Mombi from the books The Marvelous Land of Oz and Langwidere from Ozma of Oz by L. Frank Baum

Able to remove and switch heads

Imprisoned
Mombi is the secondary antagonist of Return to Oz. She is inspired by the witch of the same name from the second Oz book and Princess Langwidere from the third Oz book. She wears a red and gold dress that spikes out at the top. She constantly put on different heads from her collection, which belonged to other statues. A red key is used to unlock the cabinets in which she stores them. One time, she asks for Dorothy's and decides to lock her in her tower until it looks old enough to wear (due to her only being 11 in the film). There, she meets Jack Pumpkinhead, who reveals that one cabinet holds her real head with the Powder of Life. 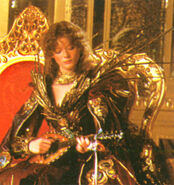 Mombi on a poster