Helping out, hanging out

Being insulted, being offended
Monica DeVertebrae is the Apatosaurus who lives next door to Earl and Fran Sinclair on Dinosaurs. She was voiced by Suzie Plakson and puppeteered by Julianne Buescher.

Introduced in the second season episode "Unmarried... with Children", Monica is a career woman, a real estate agent selling the house next door.

Monica also holds the distinction of being the first dinosaur to divorce her husband, deciding not to renew her marriage license. As a four-legged dinosaur (only her neck and head are ever shown), she often encounters racial prejudice.

Earl generally thinks of Monica as a radical, filling Fran's mind with wild ideas about independence. Her strong will and refusal to let dinosaur misogyny affect her role in the work place led to the "Sexual Harris" hearings in "What 'Sexual Harris' Meant". Roy Hess has a crush on her and in "Green Card", they briefly marry so Monica can stay in Pangaea.

Monica was the only "film-style" bodiless puppet on set, requiring a team of 4-5 puppeteers to operate the massive cables needed to move her neck joints, steady the fulcrum and roll her in and out of the window. 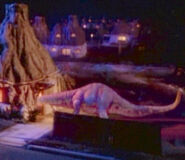 The rest of Monica's body

Add a photo to this gallery
Retrieved from "https://disney.fandom.com/wiki/Monica_DeVertebrae?oldid=4237274"
Community content is available under CC-BY-SA unless otherwise noted.