To improve her Impressionism and help Phileas Fogg win his bet

Losing the bet, lying and manipulating Fogg, her enemies, being criticized, people delaying their journey, becoming Prince Hapi's seventh wife, and being thought of only as a coat-check girl

Shares a kiss with Phileas Fogg after winning the bet on the top step of the Royal Academy of Science.

Monique La Roche is Phileas Fogg's possible future wife and the tritagonist in Disney's 2004 comedy film, Around the World in 80 Days.

Monique La Roche is first seen noticing Phileas Fogg and Passepartout entering the art gallery place where she actually works as a coat-check girl rather than would-be impressionist as she wishes to become and where Passepartout has led Phileas to believe to be a place where Thomas Edison is showing his scientific inventions to avoid the danger of the Black Scorpions.

When Monique overhears Phileas criticizing somebody's painting as "inaccurate", she intervenes; simply explaining the theory and method of Impressionism. "Unimpressed", Phileas continues criticizing other people's paintings until he notices and is impressed with Monique's painting of a flying man. However, Monique's joy to finally meet someone like Phileas Fogg who actually likes her painting is overturned when her boss finds her not doing her job as a coat-check girl, shows displeasure in her painting, and fires her; telling her to "leave art to the artists." Later, while Passepartout is fighting off the Black Scorpions in another room, Monique and Phileas can be seen discussing some of her other works she painted months ago without inspiration.

Monique and her friends on day 80/79 in England 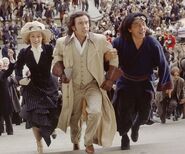 Retrieved from "https://disney.fandom.com/wiki/Monique_La_Roche?oldid=3987974"
Community content is available under CC-BY-SA unless otherwise noted.