Disney Wiki
Register
Don't have an account?
Sign In
Advertisement
in: Characters, Character stubs, Beauty and the Beast characters,
and 14 more

Being a toilet, the castle being under attack
Monsieur Toilette is a minor character in the 2017 remake film, Beauty and the Beast. His scene was cut from the film, but is featured in the deleted scenes.

In the first deleted scene, LeFou tries to take refuge in a room during the villagers' fight with the servants only to have a frightful encounter with Monsieur Toilette. After the battle against Gaston stops, Monsieur Toilette and all the other castle residents are transformed into inanimate objects. 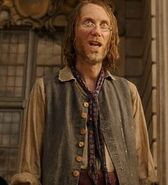