Monsters, Inc. Laugh Floor is an attraction located within the Magic Kingdom, a theme park at Walt Disney World Resort. Based on the 2001 Oscar winning Pixar movie Monsters, Inc., the attraction opened on April 2, 2007 within the park's Tomorrowland section, where it replaced the Circle-Vision attraction The Timekeeper.

On March 12, 2020, Monsters, Inc. Laugh Floor closed due to the COVID-19 outbreak's impact on Florida. However, following Walt Disney World Resort's reopening, the show reopened on August 8, 2021 in time for Walt Disney World's 50th Anniversary celebration; its soft opening date was on August 5, 2021, 3 days before its reopening.

On October 27, 2020, Disney announced that many of the shows and live entertainment would be laid off, such as Citizens of Hollywood at Disney's Hollywood Studios and Monsters, Inc. Laugh Floor at Magic Kingdom, due to a dispute between the Actors' Equity Association and Walt Disney World.[1][2]

In 2021, following Walt Disney World's reopening, Magic Kingdom announced that the Halloween overlay of Monsters, Inc. Laugh Floor would return in a new Halloween event, Disney After Hours: BOO Bash, and that the holiday overlay would return in the new holiday event, Disney Very Merriest After Hours, as part of Walt Disney World's 50th Anniversary celebration.

This attraction is set after the events of the Disney/Pixar animated films Monsters, Inc. and Monsters University. Monstropolis is running on safe, clean "laugh power," but even now it still needs more laughs to provide for the needs of the monster world. To that end, Mike Wazowski suggests opening up Monstropolis' first comedy club.

Humans will temporarily enter the monster world via a door the monsters have placed in Tomorrowland. During their visit, guests will be entertained by Monsters, Inc.'s top comedians, where their laughs will be collected and converted to electricity.[3]

The Laugh Floor only features two characters from the original movie, Mike Wazowski and Roz. Here, Mike is the "monster of ceremonies" and introduces the show's comedians. The most common characters are:

The show's unscripted nature is designed to make each performance unique. However, there are some common jokes that appear more frequently than others.

Disney Imagineers have stated that as the show continues to evolve, more acts and jokes will be added and others will be retired based on guest reactions and feedback.

One of the Laugh Floor's key components is the level of interactivity with the guests. Prior to the performance, guests are invited to use their cellular telephones to send text messages with jokes that could be used during the show. The message begins with a short code-word, followed by the guest's first name and their hometown, then their submitted joke. Generally, three to four jokes will be used during the final portion of the show (featuring Marty Wazowski).

In the theatre, movable cameras are used by performers backstage to locate guests with whom they would like to interact. A Disney cast member in the theatre will then take a microphone to the selected guest so that the guest can talk to the performers.

In 2008, the attraction was honored with a nomination for Outstanding Visual Effects in a Special Venue Project by the Visual Effects Society. The producers and artists singled out for the nomination included Roger Gould, Liz Gazzano, Joe Garlington and Daniele Colajacomo.[5] 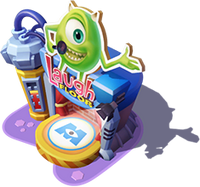