“This Monstro, I've heard of him! He's a whale of a whale! Why, he swallows whole ships alive!”
―Jiminy Cricket

Monstro is a gigantic man-eating blue sperm whale, and the fourth and final antagonist of Disney's 1940 animated feature film, Pinocchio.

Joe Grant's Character Model Department was responsible for the design of Monstro. Models were constructed both of Monstro himself and the inside of his stomach, complete with a skeleton. In addition, inspirational sketch artist Gustaf Tenggren created a watercolor image of Geppetto in Monstro's belly.

The animation of Monstro was originally to be assigned to Vladimir Tytla (animator of Doc, Grumpy, Stromboli, and, later, Yen Sid, Chernabog, and Dumbo), but, perhaps out of worry that Tytla might get carried away, Disney eventually assigned Wolfgang Reitherman to the task. He animated Monstro as a cunning creature with a brain, making his pursuit of his prey all the more frightening. To Reitherman can also be attributed, to an extent, the timing and staging of Monstro's chase sequences, which were timed to suggest his great weight and power. Reitherman drew a set of sketches for a discarded sequence showing Monstro consuming Geppetto's boat; he was to emerge suddenly on the otherwise serene sea scene, first looking like a large mound before revealing his teeth and swallowing the boat in one movement before disappearing underwater once more.

As implied by his name, Monstro is a monstrous, mean, ferocious, wrathful, vengeful, destructive (all unless when he's asleep), and massive toothed whale with a fearsome reputation among sailors and sea creatures alike, and he isn't like the conventional whale, which is a gentle and harmless animal toward humans and most of the other sea creatures though with exceptions. He will eat anything foolish enough to wander into his territory and does not seem to care what he consumes, whether it would be fish or humans like Geppetto. He is even said to have swallowed ships whole, or at least destroyed them with his tail. He also shows to have a quite treacherous attitude.

Around the seabed where he was sleeping after swallowing Geppetto's boat, there was a collection of sunken ships, though it is unknown if they were caused by him.

Because of his indifference to his prey, he is not very intelligent, which Pinocchio exploits by lighting a fire inside him to escape. He does have a degree of intelligence though, as he pretended to be asleep upon seeing a school of tuna in order to lure them closer before attacking, and had the sense to use water to put out the fire making him sneeze, and upon noticing Geppetto and Pinocchio's raft, instantly knew they were responsible for the fire. He also shows to be treacherous and cunning during the final chase as he uses surprise attacks in order to kill Pinocchio and Geppetto.

He also has a vicious temper, as Geppetto told Pinocchio that his plan to make him sneeze would make him furious. Indeed, he relentlessly pursued and attempted to kill them over it in addition to reconsuming them.

Ultimately, however, his obsession with revenge toward Pinocchio and Geppetto was the cause of his downfall, as he smashes his head against a rocky cliff while trying to recapture them.

While Pinocchio spends the night in Stromboli's troupe and later, Pleasure Island, Geppetto searches for him. Taken to sea, Geppetto, Figaro, and Cleo are swallowed whole (complete with a boat) by Monstro. He later swallows Pinocchio, who comes searching for Geppetto. He has a reputation as being a "whale of a whale" and is feared by all the creatures of the sea, and apparently on land, as even Jiminy had heard of him when he tried to warn Pinocchio of the danger involved in saving Geppetto, though he was willing to help.

Monstro is first mentioned in the film when Pinocchio and Jiminy Cricket receive a message from the Blue Fairy in the form of a dove that he has swallowed Geppetto, Figaro, and Cleo when they went to sea to search for Pinocchio. They are still alive, inside his belly at the bottom of the sea. Despite Jiminy's warnings, Pinocchio resolves to find and rescue Geppetto. When Jiminy attempts to dissuade Pinocchio, warning that Monstro is "a whale of a whale...he swallows whole ships!" he does not hesitate to accompany him in his search at the bottom of the sea. In the ocean, they begin their search for Monstro; the very mention of his name causes the various sea creatures to flee in terror. Meanwhile, inside the whale's belly, Geppetto and Figaro are trying to catch fish to eat. The former tells the latter that he fears that they will starve to death if Monstro does not wake up soon.

Monstro wakes at the sight of a school of tuna swimming nearby. When he sees them, he quickly closes his eyes again and pretends to sleep to lull them into a false sense of security, and there seems to be a smirk on his face. Opening his great eyes, he pursues them with his mouth open, tearing through the ocean as he swallows them whole. When Pinocchio sees him approaching, he flees for his life, pushing past the tuna, while he himself is consumed by Monstro, who goes back to sleep after his meal. The sprightly Jiminy escapes, but, on discovery that Pinocchio has been swallowed, attempts to enter Monstro's now-closed mouth, albeit to no avail. Inside his belly, Pinocchio, reunited with Geppetto, proposes that they escape in a raft (constructed by Geppetto) when Monstro opens his mouth. When told that "he only opens his mouth when he's eating, everything comes in...nothing goes out", Pinocchio suggests that they start a fire to make him sneeze.

Monstro wakes once again, this time to smoke rising from his blowhole. He begins taking deep breaths; while his mouth is open, Pinocchio, Geppetto, Figaro, and Cleo try to escape on the raft, and Jiminy on a green glass bottle tries to follow them; they succeed when Monstro finally sneezes, sending them flying out onto the sea. After another powerful sneeze, he furiously shakes and drinks lots of water to put out the fire and then, enraged, pursues the raft while Pinocchio and Geppetto row for their lives. He dives underwater and emerges underneath the raft; Pinocchio and Geppetto row away in time, but when Monstro leaps after them, they are forced to jump into the water. He smashes the raft to pieces with his tail. Pinocchio saves Geppetto from drowning and pulls him to shore, with Monstro in hot pursuit. As he builds up speed, the waves drifting from the cliff of the shore hinder Pinocchio. Monstro leaps into the air, aiming to consume and kill them. Finally, paddling frantically, Pinocchio swims through the hole in the cliff just as Monstro crashes into it, the impact of which creates a violent wave that sends Pinocchio and Geppetto flying out and onto the beach. As Geppetto comes to the far end of the shore, Figaro, Cleo, and Jiminy are washed onto the shore. Pinocchio, however, does not survive the blow (though he is later revived and turned into a real boy by the Blue Fairy). Like for all the other antagonists of the film, it is uncertain what exactly happened to Monstro.

Monstro had a guest star appearance in a Bonkers comic story titled "Whale of a Tale", published in the December 1994 issue of Disney Adventures. In this story, he is not villainous, but rather a very polite (albeit destructive due to his size) actor who was simply playing a villainous role in Pinocchio and had not found work in the movies since then. He is duped by a gang of crooks, posing as a movie company, into breaking into banks for them to rob, and upon finding out the truth, helps Bonkers catch the criminals.

Monstro makes a cameo in the episode "Of Mice and Menace".

His Storybook Land Canal Boats poster appears in the background of a scene in Monsters, Inc.

Through archive footage from Pinocchio, Monstro somehow makes his way to take part in the fight at the end of Hockey Homicide.

Monstro makes a cameo in The Little Mermaid TV series episode, "Resigned to It". Here, he is shown as a whale that Sebastian flosses the teeth of using a long strand of seaweed. Because of its length, it ends up tickling his gums, causing him to suck in Ariel, Flounder, and Sebastian, releasing them with a powerful sneeze.

Monstro made several cameo appearances on House of Mouse. In "Clarabelle's Christmas List", Donald reels him in when trying to reel in Santa's Naughty and Nice list. In "Max's New Car", Pinocchio and Geppetto arrive at the club inside him. As they exit his mouth, Max refers to him as a "Monstro truck". In "Ask Von Drake", he was seen during Ludwig Von Drake's headcount of all the Disney character guests. "Mickey and Minnie's Big Vacation" ends with an advertisement for "Monstro Cruise Lines".

In the DuckTales/Darkwing Duck crossover comic "Dangerous Currency", Monstro has a cameo as the monster form that Dewey takes on as an effect of the slime.

In Once Upon a Time, Monstro is briefly seen chasing Pinocchio and Geppetto. He attacks the raft and leaves.

Monstro makes a cameo in the Mickey Mouse episode "Flushed!" in which Mickey and Gubbles, after escaping the sewage system are shot out through a pipe and swallowed by the whale. Mickey and Gubbles escape by having the whale eject them out his blowhole by rubbing his uvula with a cleaning brush. 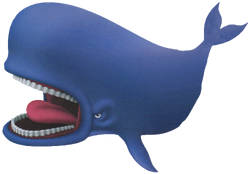 Monstro appears as both a character and world from Kingdom Hearts. Like many of the worlds from the original game, it also appears in Kingdom Hearts: Chain of Memories as well. Here, he is a space whale that swims in between realms. Outside the main area inside his mouth and throat from the film, the rest of his innards are an abstract and colorful realm of purple and green innards.

Like in the actual park, Monstro is a part of the Storybook Land Canal. At one point in the game, he eats Pinocchio's school books. To recover them, the player must gather some pepper pots to make him sneeze. The powerful sneeze releases them.

Monstro's biggest appearance is at the Disneyland version of the Storybook Land Canal Boats. Guests begin the ride with their boats passing through his mouth, which serves as a tunnel to a land of miniature buildings based on various Disney stories. The guides state that the fire Pinocchio made while inside his belly made him sneeze so hard that it blew his tail off, explaining why he has a hole where his fluke should be.

In Pinocchio's Daring Journey, Monstro makes a brief appearance at the climax. Just after escaping from Pleasure Island, the riders are warned by Jiminy that Monstro is approaching. Suddenly, he bursts out of the ocean and lunges at them, accompanied by thunder and lightning. They veer away just in time.

Monstro has a spell card known as "Monstro's Water Spout" in the attraction Sorcerers of the Magic Kingdom.

Monstro also appears in both versions of Fantasmic! as a lead-in to Mickey falling into the whirlpool and the stormy ship scene, ending the Dancing Bubbles sequence at the Disney's Hollywood Studios version and coming after the I've Got No Strings scene in the Disneyland version (The Little Mermaid and Finding Nemo/Dory underwater sequence in the 2017 revamp).

The Disney Wiki has a collection of images and media related to Monstro.