Montana is a state in the Western United States. It is bordered by Idaho to the west, Wyoming to the south, and by North and South Dakota to the east. The western third of Montana contains numerous mountain ranges. Smaller "island ranges" are found in the central third of the state, for a total of 77 named ranges that are part of the Rocky Mountains. This geographical fact is reflected in the state's name, derived from the Spanish word montaña (mountain). Montana has several nicknames, none official, including: "Big Sky Country" and "The Treasure State", and slogans that include "Land of the Shining Mountains" and more recently, "The Last Best Place." Montana is the 4th-most extensive, but the 7th-least populous and the 3rd-least densely populated of the 50 United States. The economy is primarily based on services, with ranching, wheat farming, oil and coal mining in the east, and lumber, tourism, and hard rock mining in the west. Millions of tourists annually visit Glacier National Park, the Little Bighorn Battlefield National Monument, and three of the five entrances to Yellowstone National Park.

Actors/Actresses and Crew born in Montana 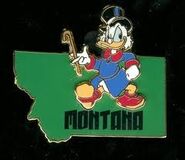 Scrooge McDuck on a Montana Pin.
Community content is available under CC-BY-SA unless otherwise noted.
Advertisement