Montana from the Marvel Comics

Gets betrayed and accidntly vaporized by Vulture

Jackson "Montana" Brice is a Marvel Comics character that appears in Ultimate Spider-Man, voiced by Troy Baker, and in Spider-Man: Homecoming, played by Logan Marshall-Green. He is a mob enforcer and a member of the mafia supervillain group known as the Enforcers. In Homecoming, he is one of the two Shockers, who works with Adrian Toomes/Vulture to kill Spider-Man. 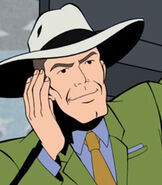 Retrieved from "https://disney.fandom.com/wiki/Montana_(Marvel)?oldid=4288207"
Community content is available under CC-BY-SA unless otherwise noted.