This article is about the character Monti from Timon & Pumbaa. For other characters, see Monty (disambiguation).

Timon (polar opposite)
Monti is a meerkat from the Timon & Pumbaa TV series who makes his first and only appearance in the episode "Kenya Be My Friend?" He is voiced by Quinton Flynn.

Monti's design is that of Timon's, but with darker fur and yellow hair (which was later used for the design of Timon's old friend Fred).

Monty (unlike Monti from the cartoon) is a shade darker than his sister Mishka, and his hair is bright red as well as very spikey, jutting forwards in a Mohawk-like fashion. Monty's eyes are red, eyeshades are brown, and his nose is black.

Monti is shown to have an extreme dislike for bugs, and is unwilling to tolerate anyone who farts. And he is also known to have wonderful manners and etiquette, unlike Timon.

Monty seems to be irascible, though this could just be from Mabu's pranks.

Monti is Timon's polar opposite. However, he never knew who Timon was. His best friend is Baampu, Pumbaa's opposite. According to the story, he hasn't seen Baampu for years. He dislikes bugs and likes to eat fresh fruits, nuts, and soybean products. He prefers walking instead of riding on other animals and doesn't like telling other people what to do. It is said that he can cook and has cooked several times for his friend Baampu.

There is another meerkat named Monty who appeared only in the Hakuna Matata magazine series Mabu's Mischief. He is Timon's nephew and Mabu's elder brother.

Monty is minding his own business sunning himself, and keeping an eye out for airborne predators, when he is startled by the mischievous Mabu. He expresses his grievances to Mabu, but his brother is not deterred, and warns the colony that the Sky Bandit is approaching just to see them scatter.

When Mabu is snatched by the eagle who actually is there, he doesn't care very much, but is pleased when he returns vowing to never be mischievous again. 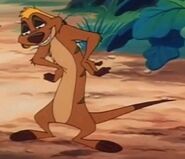 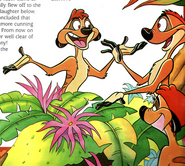