This article is about the character Monty from Phineas and Ferb. For other characters, see Monty (disambiguation).

Male with short brown hair and a dark gray sweatshirt

"Yes, and I hope to follow my father's footsteps and join you on the battle against evil."
Monty Monogram[3] is Major Francis Monogram's son and has been working in O.W.C.A. in Minor Monogram after his graduation from the H.S.W.C.A. (High School Without a Cool Acronym).

Monty is the son of Major Francis Monogram. He received acrobatic classes since birth due to his father's desire to be an acrobat. He did learn about the O.W.C.A. and met some of the agents including Agent P (when they met off-screen). They met before Monty's first appearance (Minor Monogram) as mentioned in the episode.

Monty recently graduated from H.S.W.C.A. He decided that he wanted to follow in his father's footsteps and fight evil. His father was slightly irritated that he didn't want to be an acrobat. However, Perry gets footage of Monty fighting evil and incorporating acrobatics into his fighting, gaining his father's approval. Before he returns, he sees Vanessa Doofenshmirtz and hints at a possible attraction.

Monty later meets Vanessa again and they share a coffee together. They enjoy a date, although they hit a rough point over their fathers. They make up, and he gives her a card if they want to meet again. They later go together to the Doo Wop Hop and are nearly caught by their fathers, but Carl caught them.

Monty's father, who tends to brag about Monty to make other people feel bad (mostly Carl). Major Monogram wanted him to be an acrobat but Monty wanted to fight evil like his father. He was able to gain his father's approval by incorporating acrobatics into his fighting style. Monty is keeping his budding relationship with Vanessa hidden from his father.

Monty has met Perry at least twice. They don't interact much, but they seem to be on good terms. Perry has helped Monty and Vanessa hide their relationship with their fathers. ("Sipping with the Enemy")

Monty saved Vanessa, as well as Dr. Doofenshmirtz and Perry, from Rodriugo, and foiled his evil plot. Monty seems to like Vanessa. He and Vanessa meet again unsuspectingly at Steam Noir, where they shared a table and chatted about their personal lives. They end up arguing over their father's methods but later outside of the coffee house, they decide that it is best if they did see each other again. Shortly afterward, they stop fighting and Vanessa gives Monty her phone number. They go together to the Doo Wop Hop, although they have trouble keeping it secret from their fathers.

Monty has had acrobatic training since his birth. He incorporates this into his fighting style, using a combination of acrobatics and brute force. 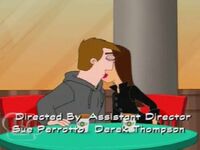 Retrieved from "https://disney.fandom.com/wiki/Monty_Monogram?oldid=4328287"
Community content is available under CC-BY-SA unless otherwise noted.