Having fun, crashing through fences, Scamp

Speed
Mooch is a minor character in Lady and the Tramp II: Scamp's Adventure. He is voiced by Bill Fagerbakke.

Mooch is an Old English Sheepdog who also lives in the junkyard with the other dogs. He is fairly dim-witted but enthusiastic.

Mooch has a good heart, but Buster doesn't see much use for him other than to crash through fences so he can get through. He's only but heard tales of Tramp, and they're pretty exaggerated. Mooch eventually leaves the junkyard with the other Junkyard Dogs minus Buster, and gets adoped by a family. 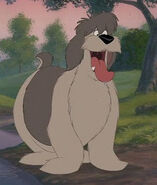