Active
The Moonfish are a school of fish who appear in the 2003 Disney/Pixar animated film, Finding Nemo. They first appear when Marlin tries to chase them for directions, but they swim away.

After a conversation between Marlin and Dory, the Moonfish unexpectedly appear. In an effort to entertain Dory, they begin doing various "impressions," which consist of them moving into different positions to form various shapes including a swordfish, a lobster, and a sailing ship. They try to get Dory to identify the subject of each of their impressions, and are constantly annoyed when Marlin gives her the answers.

Once Dory explains to them that Marlin lost his son Nemo, the Moonfish decide to help by providing directions. They begin doing impressions to illustrate the route to Sydney, where Nemo has been taken. They also tell them to swim through the "trench" (actually a submarine canyon) not over due to the jellyfish living above it but they swim over it anyway due to the trench having death written all over it due to Marlin's fears.

One of the members is known as Ted; he has relatives in Sydney.

They aren't seen again for the rest of the film.

The Moonfish forming a swordfish

The Moonfish forming a lobster

The Moonfish forming an octopus

The Moonfish forming a pirate ship

The Moonfish forming an arrow 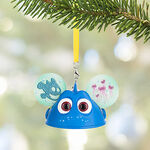