The Moonliner is a rocket ship that has been a prominent icon of Disneyland's Tomorrowland in various forms over the years, serving as the main icon for the Rocket to the Moon attraction. As it was originally created in conjunction with the TWA airline company, it was also used as an icon for their corporate headquarters in Kansas City. The current Moonliner III, introduced at Disneyland in 1998, currently serves as part of the theming and facade of the Alien Pizza Planet restaurant.

It played a prominent role in Epic Mickey and the Mickey Mouse episode Space Walkies.

The Moonliner was originally designed by Imagineer John Hench and rocket scientist Wernher von Braun, who was the science consultant for the "Man in Space" trilogy of episodes for the Disneyland TV show. Inspired by von Braun's V2 rocket design, it would take on TWA's signature red and white color scheme to reflect its conception as a commercial spacecraft in the then far-off year of 1986.

Standing at 76 feet tall, the Moonliner would be the tallest structure in the park on opening day in 1955, outmatching Sleeping Beauty Castle by about eight feet. The "real" Moonliner was conceived as something that would stand over 200 feet tall, making the theme park Moonliner about a one-third scale model.

In 1962, TWA would drop their sponsorship and Douglas Airlines would take over, resulting in the Moonliner being repainted and rebranded as the Douglas Moonliner, with a blue and white color-scheme and a vertical Douglas logo running down the side. The Douglas Moonliner would only last for five more years, being taken down in 1967 for the construction of a new Tomorrowland. The fuselage was moved to a storage boneyard on the northwestern corner of Disneyland's backstage facilities and could be seen there as far as 1981.

In 1956 Hughes added a 22-foot-tall (6.7 m) version of the Disneyland Moonliner, known as the TWA Moonliner II, atop the southwest corner of the TWA Corporate Headquarters' Building, located at 18th Street and Baltimore, near downtown Kansas City, MO. When Hughes and Disney ended their business partnership in 1961 after Hughes sold TWA, the airline's management removed the Moonliner II from its roof and sold it in 1962 to a local RV company called SpaceCraft.

SpaceCraft moved the now all-white Moonliner in 1970 to Concordia, MO, where it landed near the south side of Interstate 70, between Kansas City and St. Louis, MO, where SpaceCraft operated its assembly plant; it slowly rusted on that spot for more than 25 years. In 1997 a Columbia, MO lawyer, who collected Disney memorabilia, bought the deteriorating Moonliner II and then began a long, careful restoration process, eventually bringing it back to its 1956 condition and sporting its original red and white TWA paint scheme. The rocket is currently on loan to the National Airline History Museum at the Charles B. Wheeler Downtown Airport, in Kansas City, MO, where it stands very near an original, fully restored to flight status, TWA Super "G" Constellation airliner; the Moonliner II is located about five miles from its original TWA rooftop location.

On May 1, 1998, as part of a New Tomorrowland, a one-third scaled down version of the Moonliner was installed as part of Redd Rockett's Pizza Port, a restaurant built in the original Rocket to the Moon attraction space. Sponsored by Coca-Cola, the new Moonliner was able to retain the original TWA red and white color scheme and featured the tagline "Delivering Refreshment to a Thirsty Galaxy". The engines of the rocket occasionally spray cooling mist.

In early 2005, the Nicholson Group, a Kansas City, Missouri urban development firm, hired local architectural firm, El Dorado Inc, to design and oversee the historic restoration of the TWA Corporate Headquarters building, complete with a replica Moonliner II. The Bratton Corporation was contracted in early 2006 to fabricate a brand new TWA Moonliner II replica for the building's roof. This new, fully illuminated rocket was completed and then installed on September 29 of that year at the very same southwest corner roof location as the original Moonliner II. The TWA building was then leased to Kansas City-based advertising agency Barkley, Inc., and the agency moved in on November 14, 2006. The area surrounding the TWA building is known as Kansas City's Crossroads Arts District.

The Moonliner plays a major role in Epic Mickey, with much of the game being focused around finding three major components that have been taken by the villains threatening Wasteland, so that Oswald the Lucky Rabbit can fix the ship and get Mickey back to his home in the Cartoon World. When the Shadow Blot is fully unleashed on the land, the plan changes to use the Moonliner as a weapon, though the Blot's tendrils begin to drain the rocket's paint and severely damage it, resulting in it crashing into Dark Beauty Castle.

In the Space Mountain graphic novel, the Moonliner is a series of spaceships used by the time research team on Space Mountain to probe the Cygnus X-1 black hole and travel through time and space, with the Moonliner 7 being the book's main rocket. The failed Pioneer Mission of the Moonliner 5 that ended up being destroyed by the black hole was an event that looms large over the story. This mission cost the life of Anne Krell's fiance, driving her to try and destroy the Moonliner program and eventually become Queen Paradox.

The Moonliner appears in the short "Space Walkies", where Mickey is returning from a space mission piloting the ship, but ends up having to take Pluto on a space walk. After a series of misadventures, they eventually make a successful landing back in Tomorrowland in front of Space Mountain. 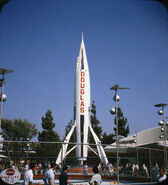 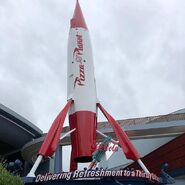 The restored Moonliner II at the Airline History Museum in Kansas City.

In Epic Mickey
Add a photo to this gallery

Retrieved from "https://disney.fandom.com/wiki/Moonliner?oldid=3928999"
Community content is available under CC-BY-SA unless otherwise noted.