Obsessions, Marge yelling at him

Active
Moonwind Stardancer is a major character in Disney•Pixar's 2020 animated feature film, Soul. He is a mystic who helps lost souls get over their obsessions.

Moonwind is the product of a midlife awakening, which led his former self to change his name and his day job to seek a happier life. Moonwind is now a devoted sign twirler on a Manhattan street corner—an activity that brings him joy, putting him into the zone, which allows him to mentally and spiritually journey to a mystical place called The Astral Plane (near The Great Before), where he rescues lost souls from their uninspiring, stressful lives.

Moonwind first appears on a pirate ship rescuing Joe Gardner and 22 from a lost soul in the Astral Plane. Joe asks Moonwind to help him and 22 get back to his own self in the real world to which he agrees just as Moonwind introduces himself to him, also introducing his fellow souls, Windstar, Dancerstar, and Dreamerwind just as the four plan to bring the lost soul back home. Moonwind explains to them that lost souls happen on people who cannot let go of their anxieties and obsessions, making their souls become lost souls to which the lost soul Moonwind and his friends captured is the soul of a hedge fund manager (who turned into a normal soul after allowing him to become spontaneous) as Moonwind and his fellow companions plan to return the manager's soul to his own body in the real world to which the manager in the real world feels spontaneous. Joe tries to do the same thing the manager's soul did but all he sees is the Great Beyond, meaning he cannot go back to Earth yet. Moonwind and his fellow companions decide to help Joe return to his own body.

On board Moonwind's ship, Joe curiously asks Moonwind and his companions about where their real selves are to which Moonwind explains that his living self is on Earth, followed by Windstar, Dancerstar, and Dreamerwind sharing their real life counterparts to Joe. Moonwind in the real world twirls a "Hot Deals" sign indicating that he is in New York City near Tony Tony Tonios according to Moonwind in the Astral Plane himself. Moonwind explains that mystics like him meet up in the glorious landscape every Tuesday just as the ship sails past a group of lost souls, explaining to Joe that lost souls in the Astral Plane are not different from those in the Zone. Moonwind continues explaining to Joe that the Zone is an enjoyable place, to which when a soul's joy becomes obsession, it becomes disconnected from life, causing the soul to transform into a lost soul. Moonwind explains to himself that he was once a lost soul himself. Arriving to the spot where Moonwind and his fellow companions plan to bring Joe back to the real world, Moonwind explains to him that he must tune back to his physical surroundings by focusing and meditating patiently and calmly. Joe hears his current self who is in the hospital at the real world. Joe and 22 impatiently enter Earth again much to Moonwind's worry that he cannot rush meditating.

Joe and 22 (controlling the bodies of Mr. Mittens and the real Joe respectively in the real world) approach Moonwind who would help fix the problem, to which the conversation becomes interrupted when he wears an angry pedestrian named Marge telling him to continue spinning the advertising sign in order for Moonwind to get back to work. Joe (in Mr. Mittens' body) explains that he must be at the Half Note Club by 7:00, to which Moonwind explains that he must wait for another thin spot to open between Earth and the Astral Plane, much to Marge's anger. Moonwind appears again this evening to help fix the confusion with Joe and 22 to which 22 refuses to leave. Joe controlling Mr. Mittens chases the real Joe controlled by 22 across New York City.

In the episode "Soul of the City", Moonwind meditates calmly on a bench at a park just as a pigeon looks at him. 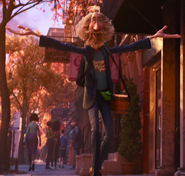