Mickey, Donald and Goofy head out into the woods. While Mickey lures one moose using a bush disguise, the others lure another with a female moose decoy. When the two target moose meet and decide to take each other on, our heroes are all in trouble. 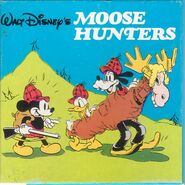