Abby redirects here. For other characters of the same name, see Abby (disambiguation).

Rip offs, kids telling her to go away, busted games

“I get next game!”
―Moppet Girl

Moppet Girl is first seen inserting quarters in the Hero's Duty game console and prepares to play. She appears on the screen of a robot posing as the player. As she (and the robot) shoot the Cy-Bugs, a horrified soldier (Wreck-It Ralph in disguise) runs up in front of her and asks her about the time when video games became so violent and scary. This leaves her surprised and confused for a moment, but then Ralph hides behind the robot and tells the on-coming Cy-Bug to take her (the Moppet Girl on the screen). When the Cy-Bug crashes into the robot, the game calls it Game Over.

Disappointed, Moppet Girl decides to play a different game. She has planned to play Sugar Rush next, but the boys already playing the game tell her to leave because they'll be playing it all day. Seeing nothing else to do, she decides to play the classic game, Fix-It Felix Jr. But when the game's antagonist, Wreck-It Ralph, does not show up, she wonders where he is. The Nicelanders and Fix-It Felix wonder about the same thing, but they stick to the program. But then, to Moppet Girl's surprise, Felix ignores the controller (with the joystick for the game moving by itself) and runs to the brick pile to look for Ralph. Never having seen the game characters behaving so strangely before, she calls Mr. Litwak about the incident with the game, who gives her quarter back. He tells her that if the game can't be fixed by tomorrow, the game will be unplugged. She later makes a short appearance in King Candy's vision of Vanellope's fate when she wins the race; Moppet notices that Vanellope is glitching and calls Mr. Litwak, who puts up the "out of order" sign and causing Sugar Rush to be unplugged and forcing all the inhabitants of Sugar Rush to evacuate except for Vanellope who is left behind to be deleted.

Moppet Girl is not seen again until the movie's finale. During that time, she is surrounded by other children while playing Fix-It Felix Jr., which now includes a bonus level of Wreck-It Ralph and the antagonists from Q*bert wrecking the building, and Fix-It Felix and Q*bert are working together to fix it. She is later seen playing Sugar Rush, with Vanellope as her character. She activates Vanellope's glitching ability (teleportation) to get past the two racers in front of her to end in first place. As Vanellope celebrates her victory after winning the trophy, Moppet Girl fist-bumps the screen as if she is giving Vanellope a fist bump. 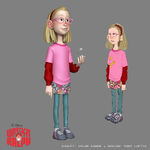 Moppet Girl playing with her friends.

A storybook illustration of Moppet Girl pointing out Ralph's disappearance.