More Jungle Book is a Jungle Book storybook released on book and vinyl as a part of the Disney Read-Along series and as a Little Golden Book. The album was released as a testing ground to see if people wanted to see another movie with the characters. When the record sold poorly, all plans to make a sequel to the movie were held off until 2002.

While Phil Harris and Louis Prima reprised their roles as Baloo and King Louie respectively in this record, Bruce Reitherman and Sebastian Cabot however did not reprise their roles as Mowgli and Bagheera respectively; instead they were replaced by Dallas McKennon and Ginny Tyler respectively. This also marks the only time Mowgli is voiced by a woman instead of an actual child as in other screen appearances. 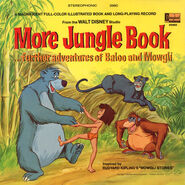 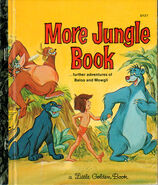 Little Golden Book cover
Add a photo to this gallery

Retrieved from "https://disney.fandom.com/wiki/More_Jungle_Book..._Further_Adventures_of_Baloo_and_Mowgli?oldid=4481803"
Community content is available under CC-BY-SA unless otherwise noted.