This article is about the character from PKNA. For other characters who share the same name, see Morgan (disambiguation).

Morgan Fairfax
Morgan Fairfax is an evil scientist working for the D.O.E. (Department of Environment), he tries to flood the West Coast in PKNA #4 "Terremoto" ("Earthquake") but was stopped by the Duck Avenger and Uno. He would later on ally himself with Oberon De Spair and work for Belgravia. In issue 45, Fairfax is shown to have become overweight.

In Might and Power, Fairfax meets Lieutenant McCoy in jail. McCoy reveals his actual identity as the Evronian Grrodon, and Fairfax puts his projects to his service in order to get back at the world that never understood him. 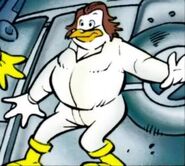