4
Morgan Freeman is an American actor who is best known for playing the Easy Reader on the PBS educational children's show The Electric Company. He has one of Hollywood's most distinctive voices of all and has starred in more than 75 films. He is also well known for his role as God in the 2003 comedy Bruce Almighty and its 2007 sequel Evan Almighty.

He is the current narrator for the Hall of Presidents. He was mentioned in the Girl Meets World episode "Girl Meets Jexica" and the MECH-X4 episode "Let's Get Some Answers!"

For Disney, he played Drosselmeyer in The Nutcracker and the Four Realms. 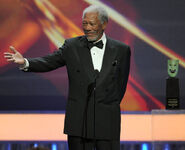 Morgan Freeman at premiere of The Nutcracker and the Four Realms in November 2018.
Add a photo to this gallery

Retrieved from "https://disney.fandom.com/wiki/Morgan_Freeman?oldid=4485366"
Community content is available under CC-BY-SA unless otherwise noted.