This article is about the character from Enchanted. For other characters, see Morgan (disambiguation).

Her strength
Her martial arts

She is an outgoing 6-year-old who is not afraid to speak her mind about Nancy to her father. Even though Giselle is a stranger to her at first, she speaks to her without being shy. She, however, is shy at the beginning of the movie.

She is small and slender with brown hair and eyes, fair skin, and rosy cheeks.

She is Robert Philip's imaginative 6-year-old daughter. She befriends Giselle and is not sure how she feels about the initial thought of her dad marrying Nancy.

Morgan Philip likes the woman (Nancy Tremaine) that her father is dating, but she does not consider her as the mother material type. When Giselle comes to the real world, Morgan immediately befriends her. Later, she starts to show tearful expressions when Giselle leaves. She even takes Giselle on a shopping spree with her father's credit card so that she can go to the King and Queen's Ball that is being held in New York City. Morgan is later seen after Giselle and Robert are a couple, dancing with her father and new stepmother.

A teenage Morgan appears in this movie, now portrayed by Gabriella Baldacchino. 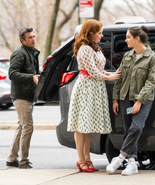 A teenage Morgan with her father and stepmother in Disenchanted.