Hercules
Once Upon a Time (mentioned)

God of Sleep and dreams and night

Phantasos (younger brother)
Morpheus is the Olympian God of sleep. At the dawn of time, Morpheus was given the position of "God of Sleep" over his younger brother Phantasos, due to his seniority. This caused him to gain his brother's vengeful wrath, which he would exact many eons later.

Morpheus in Greek mythology is the God of Dreams, leader of the Oneiroi (dream gods), and he is the son of Hypnos, God of Sleep, and Pasithea, Goddess of Hallucinations and one of the three Muses according to Roman poet Ovid. He has several brothers - the best-known being Phantasos, God of Apparitions and Phobetor, God of Nightmares. His uncle is Thanatos, the God of Death. His grandparents are Nyx, Goddess of Night and Erebus, God of Darkness. In some sources, Morpheus was said to be romantically involved with Iris, the Goddess of the Rainbow, however little information exists to expand upon this.

He was said to reside in the Land of Dreams (Demos Oneiroi) which was located somewhere within the Underworld. Poets often referred to the two gates leading from the dream realm. One gate was fashioned of sawn ivory, the other of polished horn. False dreams were said to pass through the gate of ivory, while truthful, prophetic dreams winged their way out through the gate of horn.

His name means "shape shifting". In myths, Morpheus is said to be able to enter the dreams of mortals and transform into anything. The drug morphine is named after him. His symbol is the poppy. His Roman name is Somnus; the Oneiroi known collectively as the Somnia.

Morpheus' most defining trait is his complete tranquility, not unlike as though he is half-asleep, and is very slow, if ever, to display high emotions such as shock, anger or being upset, to name a few. The God of Sleep is also very wise and kind, as he shows forgiveness to anyone who has wronged him, often even turning what they did into a positive thing, as with his brother Phantasos' nightmares. Morpheus has stated that he isn't good at confrontation.

As a god, Morpheus possesses the natural powers & abilities of an Olympian god such as immortality, omnipresence, vast strength, and the potential to do magic such as the ability to shape-shift, to teleport and to manifest objects. As the God of Sleep he possesses the ability to make mortals and other gods fall asleep via his sleep blanket. However even he is not immune to falling asleep via this blanket, as seen in the episode "Hercules and the All Nighter". Morpheus also appears to bring the night by dragging his blanket across the sky.

In the film, he only appears briefly when he is shown bringing the night via his sheep-drawn chariot after the party to celebrate the birth of Zeus and Hera's newborn child Hercules. By the end of the film, he reappears when he along with all the Olympian Gods celebrate Hercules' victory against Hades, causing him to once again become a god and allowing him to return home to Mount Olympus.

In the animated series, he played a much more larger role, where he would often appear in either a cameo or as a major part of the plot.

In "Hercules and the Long Nightmare" at the dawn of time, we see how the each of the Greek Gods got their positions when helping to build Greece. Morpheus is made God of Sleep, much to the annoyance of his younger brother Phantasos, who believes that he would be better suited to the job. Phantasos makes his own sleep blanket to drag through the night sky, which results in the mortals receiving terrible nightmares. With mortals suffering and his approval rating plummeting, Morpheus enlists Hercules and Phil to help.

In "Hercules and the All Nighter", in order to stay up all night to study for exams, Hercules and Icarus go to see Morpheus and ask him to hold off on sleep for a little while. Morpheus rejects the idea, but when Hercules accidentally puts him to sleep, Greece and parts of Persia are doomed to stay awake.

In "Hercules and the Return of Typhon", Morpheus appears briefly during the three-day weekend festival celebrating Zeus' victory over the Titans.

He is briefly mentioned by Mr. Hyde when talking about The Temple of Morpheus. When Mr. Gold uses Sand from the temple, his unborn son appears to him and Belle, using the alias of Morpheus.

Morpheus as he appears in the Hercules movie. 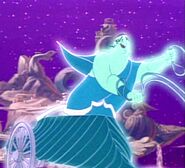 Morpheus on a Chariot