"I'm sure glad to see you kids!"
Mortimer Mouse is Minnie Mouse's cattle-farming uncle who owns a ranch in Death Valley. He first appeared in the 1930 comic strip storyline Mickey Mouse in Death Valley.

In his introductory tale, Uncle Mortimer supposedly had died and willed his ranch to his niece, Minnie. Sylvester Shyster was Mortimer's lawyer, and executor of his estate. Shyster had tried to cheat Minnie out of her inheritance, but with the help of Mickey Mouse and a mysterious cloaked figure, Shyster's plot was uncovered. The mysterious stranger turned out to be none other than Mortimer himself, who was testing Shyster in order to confirm his fears about him being a crooky. 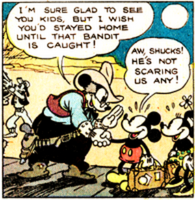 Mortimer welcoming his niece Minnie and her boyfriend Mickey.

Mortimer in his very first appearance.

Mortimer in the Mickey Mouse comic Foxed (first published in 1993).
Add a photo to this gallery
Retrieved from "https://disney.fandom.com/wiki/Mortimer_Mouse_(Minnie%27s_Uncle)?oldid=3820747"
Community content is available under CC-BY-SA unless otherwise noted.