Mother Ginger from the story by E. T. A. Hoffmann and the ballet by Pyotr Ilyich Tchaikovsky

Regent of the Land of Amusement

To protect the Realms

The Fourth Realm/Land of Amusements

Whip
Wooden Sword
Mother Ginger is a major character in The Nutcracker and the Four Realms.

She is the kind and wise ruler of the Fourth Realm, known as the Land of Amusement, who was manipulated into carrying out the evil schemes of the sinister and deranged Sugar Plum Fairy. In the end, Clara Stahlbaum and Phillip the Nutcracker realize the kindness within Mother Ginger and help Mother Ginger defeat the Sugar Plum Fairy.

Mother Ginger is based on the character of the same name from the story by E.T.A. Hoffman and the ballet by Pyotr Ilyich Tchaikovsky.

Unfortunately, she was framed by The Sugar Plum Fairy, who set out to conquer all four realms. Sugar Plum convinced the other regents and their people that Mother Ginger was evil, getting most of her inhabitants to flee and join the others. The only inhabitants that still stayed with Mother Ginger were an assortment of mice and 6-7 clowns who defended her giant moving palace (shaped like her).

When Clara Stahlbaum entered the world her mother had created, the first thing that she had done was venture into the Land of Amusement to find the key, which one of Mother Ginger's mice had stolen. Once entering Mother Ginger's realm, she encountered The Mouse King, whom she successfully evaded from. From the recluse of Mother Ginger's palace, she tried to call upon Clara to warn her about Sugar Plum, but she fled from her.

When Clara ventures back into her realm to reclaim the key, Clara is grabbed by Mother Ginger's giant palace and thrown inside, in which she is then greeted by a bunch of clowns known as the Polichinelles. The Polichinelles tease and torment her before sending her up to Mother Ginger's chambers, in which Clara tricks Mother Ginger, snatching the key to return it to Sugar Plum. In fear of what Sugar Plum has planned for the realms, Mother Ginger sends her trusted mouse advisor to chase after Clara.

After Clara's confrontation with Sugar Plum, Phillip the Nutcracker and Mother Ginger make an agreement that Phillip will distract Sugar Plum's troops while Mother Ginger navigates through passageways to find Clara. This mission proves successful, as she helps Clara in aid to alter her mother's machine, which results in the death of Sugar Plum, in which she is turned back into a toy.

Mother Ginger then takes Sugar Plum's spot on The Regent Council, returning to her former regal-ware, and making some passive agressive comments about nobody listening to her before her banishment. She tells Phillip that he is now the General of the Soldiers, and bids Clara farewell on her journey back home. 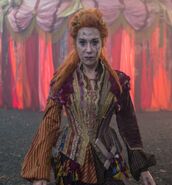 Retrieved from "https://disney.fandom.com/wiki/Mother_Ginger?oldid=3872849"
Community content is available under CC-BY-SA unless otherwise noted.