The film deals with the events surrounding Gordon Goose and Little Bo Peep, who, while still trying to find her sheep, goes to Mother Goose's house for help, only to discover her sudden absence. Bo Peep and Gordon search Rhymeland to flush out what has happened to her, all the while watching as many Mother Goose characters begin to mysteriously disappear.

The film features an all-star cast including:

Several edits and changes were made to the audio, musical score, and video for the TV edit. A non-comprehensive list of some of these variations appears below: 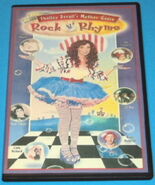