Disney Wiki
Register
Don't have an account?
Sign In
Advertisement
in: Characters, Males, Song of the South characters,
and 12 more

“Mr. Bluebird's on my shoulder... It's the truth, it's actual... Everything is satisfactual...”
―One of the lines from the musical number "Zip-a-Dee-Doo-Dah" referencing Mr. Bluebird

Mr. Bluebird is a minor character in the 1946 film, Song of the South. He is sporadically referenced in the song "Zip-a-Dee-Doo-Dah", appearing throughout the film.

During the musical number "Zip-a-Dee-Doo-Dah", Mr. Bluebird appears as a gag character throughout the animated sequence. He then takes Uncle Remus to a gopher burrow where three female gophers join in chorus alongside three hummingbirds and later during the bee verse. He later appears at the end of the film joining alongside animated characters following the entire group skipping away during the reprise of "Zip-a-Dee-Doo-Dah".

Mr. Bluebird featured prominently in the Splash Mountain attractions at the Disney Parks. Unlike in the film where his dialogues only consist of chirps and whistles, Mr. Bluebird actually speaks in the ride.

He also appeared in the House of Mouse episode, "Pete's One Man Show", making a brief cameo appearance during Boom-Da-Boom, where he sat on Pete's shoulder and got flicked away by him. In addition, he appears briefly, along with several other Song of the South characters, in the Mickey Mouse Works short, "Computer.don". 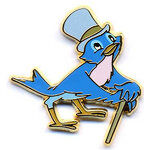 Mr. Bluebird on the marquee for a Disneyland snack cart.