Something Wicked This Way Comes

Getting discovered and caught, people not cooperating

Dark's background is a mystery, although he refers to being raised in a strict religious upbringing. When asked if he reads the Bible, he replies, "I've had every page, line, and word read at me, sir!" Another, perhaps more fitting interpretation of the Bible sequence, given his dismissive nature to Charles and his array of books, would be that he is mocking Charles' belief that the Bible would have any sort of effect in either repelling or hurting him.

This would indicate that Dark is not a devil or demon in the Christian sense of the term. He died by growing old when he was on the magic carousel.

Mr. Dark is the leader of the Autumn People and he initially holds sway over the other main characters, but his power weakens when Charles uses positive emotions against him, something that he cannot comprehend or withstand.

Mr. Dark is a gaunt, sinister man with pale skin and black hair who bears tattoos all over his body, one for each person successfully tempted into joining the Dark's Pandemonium Carnival that he founded and runs. He is always seen wearing a black suit and matching top hat. 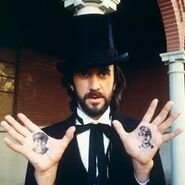 Mr. Dark with tattoos of Jim Nightshade and Will Halloway on his palms

Mr. Dark making a deal with Halloway if he tells Mr. Dark where the boys are, he'll make him young again 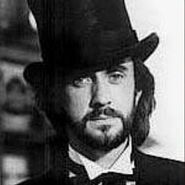 "My name is Mr. Dark. I advise you to respect that."

Mr. Dark in front of Mr. Copper, Will Halloway and Jim Nightshade at the Carousel

Mr. Dark with a parade

Mr. Dark with his freaks

The Truth is you're lying.

Mr. Dark dying by getting shocked and having the carousel age him

Retrieved from "https://disney.fandom.com/wiki/Mr._Dark?oldid=4310454"
Community content is available under CC-BY-SA unless otherwise noted.