Good
Mr. Mussels is a mussel and the drama teacher at Freshwater High in Fish Hooks. He tries to motivate his students, but yells like a sergeant. He enjoys teaching and singing.

Mr. Mussels first appeared when the school was doing the school talent show. He scared Albert with his loud voice. When Bea came flying out from the tank, she had an amazing entrance, but Mr. Mussels said she was missing a little special something. The fish flakes can tilted and fell on the stage, making it look like confetti. He gave Bea the part ("Fish Out of Water"). Mr. Mussels got put in a bowl by Milo because he said that his voice scares everybody ("Milo Gets a Ninja").

At Mr. Mussels' drama class, he yelled at his students that everyone has to have a dream, although Milo was the only one in his class who didn't have a dream. When Milo asked Mr. Mussels what happens if you don't have a dream, Mr. Mussels told him that dreams feed the heart and keep you company. He also told him that dreams are so important that if you don't have one, you'll end up cold, hungry, and alone. Later when Milo went to the fridge to get a drink, an imaginary Mr. Mussels appeared, and he led Milo to seeing the bird cage, which made Milo want to free the bird. When Milo failed to, Mr. Mussels, who just awoke from his sleep, found Milo, who was getting dragged back into the tanks by Bea and Oscar. Mr. Mussels questioned Milo if he will sacrifice anything to fly, in which Milo nods. Mr. Mussels told Milo that was a real dream, and that his friends should support him. When Milo found out that the bird could talk, the bird offered Milo, Oscar, Bea and Mr. Mussels a ride on his back so that Milo could fulfill his dreams ("Flying Fish"). Mr. Mussels and Coach Salmons both sang a part of the song Now That I (Don't) Have You ("Two Clams in Love"). When Milo started recycling at Freshwater, he took the toilet papers to recycle them. However, Milo took them while Mr. Mussels was using the bathroom ("Legend of the Earth Troll"). 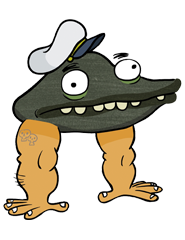 When Oscar did a realistic impression on the Queen of Fish England, he ran into Mr. Mussels, who believed that Oscar really was the queen. So thinking Oscar is the queen, Mr. Mussels took Oscar, Bea, and Milo a ride in his limousine to Fish England. Later when Oscar was about to marry the duke, Mr. Mussels came to the wedding to stop the queen from marrying the duke and marry Mr. Mussels instead. So the wedding officiant told Mr. Mussels and the "duke" (who is Milo in disguise) to compete in a "Slow Jams Rap Battle". Mr. Mussels ended up beating Milo since Milo did his poor impression of Mr. Mussels himself. However, Oscar didn't marry Mr. Mussels after he and Milo went back home with Bea after she interrupted the wedding with a wax sculpture of the queen ("Oscar Makes an Impression"). Mr. Mussels was the one who wrote the "Potatoes for Winter" play. When Bea asked Mr. Mussels if he had anything to say to his students before the play started, he said that he wrote the play with nothing more than words, and that they should all try their best for the play. When Jocktopus was getting stage fright, Mr. Mussels encouraged him a little by saying the true power comes from the heart and not from strength. Later when Bea trapped Jocktopus in the trapdoor, she went to Mr. Mussels and told him that Jocktopus was trying to ruin the stage on purpose. However, Mr. Mussels explained to Bea that one day when Mr. Mussels was typing the script for the play, Jocktopus came to his room and told him how he needed to be a part of the show. So the two secretly practiced and rehearsed for the play, until Jocktopus was truly ready. This caused Bea to go back and fulfill Jocktopus' dream of being part of the show ("Fish School Musical").

Mr. Mussels announced to his students that the school talent show is coming up, and that the winner gets a free coupon book. At the end, Mr. Mussels gave to coupon book to Bea's dance group, who were the winners of the talent show ("Fish Talent Show"). Mr. Mussels auditioned for the Hokey Poke commercial, although he did not get the part ("Bea's Commercial").

Retrieved from "https://disney.fandom.com/wiki/Mr._Mussels?oldid=3897593"
Community content is available under CC-BY-SA unless otherwise noted.