Mr. Pricklepants is a supporting character in the Disney/Pixar Toy Story franchise, first appearing in Toy Story 3. He is a stuffed hedgehog toy.

He wears lederhosen and usually views himself as a thespian. Mr. Pricklepants was made in Germany and is from the Waldfreunde collection of premium imported plush toys like Sonic the Hedgehog is from Japan. He is the de facto leader of Bonnie's toys and takes playtime as a job in acting. He warns Woody of how dangerous Lotso is and helps him get back to Sunnyside Daycare. In the credits, Mr. Pricklepants welcomes Woody and his friends to Bonnie's house and is seen playing Romeo in a version of Romeo and Juliet with one of the Alien toys as Juliet.

Mr. Pricklepants is a thespian hedgehog in lederhosen who says that he's "trying to stay in character," even when Woody tried inquiring as to his whereabouts. As Bonnie began playtime with her toys, she spits a jellybean onto Mr. Pricklepants in response to one of Woody's automated voices mentioning poison. He noted how well Woody did at playtime and figured he must have been a classically trained actor, whereas Woody says it came naturally to him due to his years with Andy. Once Bonnie went to sleep, her toys helped Woody chart a path to Andy's house. But when he mentions passing a message to his fellow toys at Sunnyside Daycare, Bonnie's toys become alarmed and ask how he escaped. Mr. Pricklepants describes Sunnyside as "a place of ruin and despair, ruled by an evil bear who smells of strawberries." He points out Chuckles to testify. Despite their warnings that it's too dangerous to return to Sunnyside, Woody went anyway and rescued his friends. His warnings were valid, as Woody found himself under the iron fist of Lotso. The next day, Woody returns to Bonnie's house with his friends, having been donated by Andy. When Andy leaves, Mr. Pricklepants is seen talking with Hamm.

In the end credits, he plays Romeo, alongside an Alien who is playing Juliet.

Mr. Pricklepants only appears briefly in the fourth installment, only at the beginning and end. He is first seen throughout the "You've Got a Friend in Me" sequence, being played with by Bonnie.

Two years after the third film, Mr. Pricklepants now lives with the rest of Andy's toys with Bonnie being their new owner. He first appears with the rest of the toys waiting in the closet for Bonnie to finish her breakfast. The toys are cramped and annoyed with one another. He, along with many of the other toys, is played with more prominently than Woody, who Bonnie neglects. When Bonnie arrives in her room, she plays "town", and casts Mr. Pricklepants as the "baker" while leaving Woody alone in the closet. Woody watches in sadness as the other toys are played with. Suddenly, Bonnie's father walks in and tells her to get ready for kindergarten orientation, much to her dismay. When Bonnie asks if she can bring a toy (namely Jessie) with her, Mr. Anderson says toys aren't allowed in school. After they leave, the toys are about to get up when Dolly tells everyone to freeze, since Bonnie always forgets something and could be back any second. Woody comes out of the closet to speak to Dolly. Before talking to him, Dolly is seen dealing with Mr. Pricklepant's complaints about being cast as the baker, saying that the hat-shop owner is "the role he was born to play". Dolly quickly shoos him away and tells him to go back to his bakery, much to his sadness. Despite Dolly's protests, after seeing Bonnie crying under her bed when she comes back into the room, Woody decides to sneak into her backpack to keep an eye on her. During her orientation, she creates Forky, a spork who suddenly comes to life.

When Bonnie returns and drops her backpack off in her room, Woody climbs out and is scolded by the rest of the gang for breaking the rules. But Woody alleviates the situation by saying that not only did Bonnie have a great day in class and they're all going on a road trip (to which the Aliens "ooh" in excitement despite not going), but Bonnie made a literal friend in class. Woody pulls out Forky and introduces him to the gang. Like the others, Mr. Pricklepants is both shocked and confused by both Forky's existence and his love of trash. When Woody says that Forky is the most important toy to Bonnie right now, Mr. Pricklepants questions this by obviously saying that he is a spork. They then watch in confusion as Woody fishes Forky out of the trash, saying how he'll keep an eye on his during the road trip.

A year later after Woody leaves the gang to join Bo Peep as a lost toy, Bonnie drops off her backpack after her first-grade orientation. Jessie emerges from the bag and is barraged with questions by the other toys. Jessie interrupts everyone by saying Bonnie made another new friend and introduces the gang to Karen Beverly, a toy knife Forky becomes smitten over.

Mr. Pricklepants is first seen numbering the Aliens 1, 2, and 3 for an upcoming play that he is planning for his vacation plans. He can be seen portraying the humuhumunukunukuapua'a when Mrs. Potato Head shows Barbie and Ken the state bird, fish, and pineapple. He later serves as a waiter when Barbie and Ken are having their "dinner".

He also appeared in Partysaurus Rex, although he didn't speak.

He is one of the toys that Bonnie brings on her road trip. When Bonnie's mom's car breaks down near the Sleep Well motel, Mr. Pricklepants tells the toys that the roadside motel is a perfect location for a horror movie. This is his first leading role in the Toy Story franchise.

He appears in Toy Story That Time Forgot at the beginning and end.

Mr. Pricklepants mentors Forky about the complexities of being an actor and the art of a convincing performance in this episode.

Mr. Pricklepants makes a silent cameo in this episode.

"Frolic your afternoons away on woodland adventures with Mr. Pricklepants! This charming lederhosen-wearing hedgehog is from the Waldfreunde collection of premium imported plush toys. He may look prickly, but the plump and fuzzy Mr. Pricklepants is made strictly for cuddling! Hand wash and air dry. Restore fluffiness with fingers. Made in Germany." 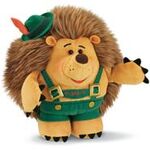 Mr. Pricklepants with Buttercup and Trixie

Mr. Pricklepants as the waiter who serves Barbie and Ken

Mr. Pricklepants with Woody and Dolly performing a hula dance for Barbie and Ken 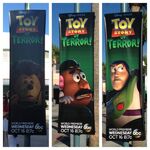 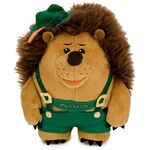