Marlin worrying over his son Nemo, his students in danger, interruptions

Active
Mr. Ray is a blue and white spotted eagle ray who appears in Disney/Pixar's 2003 animated film, Finding Nemo and briefly in its 2016 sequel.

Mr. Ray is the teacher of Nemo's class. He's the jolliest science master working in marine education. He is an eagle ray who believes in the practical, taking his little fishy pupils for a ride on his back to teach them about the other creatures of the seabed and singing a whole bunch of memory-aiding ditties along the way. He helps teach his class by singing the "Let's Name the Species" song. Despite his jolly personality, he is shown to be very protective of his students, telling them to hide under him when danger approaches like when divers arrive at the coral reef.

Mr. Ray first appears singing around the reef where the students usually meet him. Just as Nemo prepares to go to school, he tells his father Marlin that he can go now just as Nemo prepares his first day of school. Before Nemo can go, he tells him that in order to join his class, every new explorer must answer a science question to which Nemo completes his answer saying he lives in an anemone just as Nemo is welcomed to his class. Mr. Ray then takes his students on a field trip at the Drop Off where he teaches his students about science to which Tad, Sheldon, and Pearl leave while he is talking to which Nemo decides to catch up.

After arguing with his father about why Nemo must avoid swimming in places that have open water, Mr. Ray talks to Marlin about the conversation he heard earlier. Marlin discusses with him about Nemo's problem as Nemo takes risk into swimming into open water just as his father and his schoolteacher continue talking. He and the other fish react to Nemo taking risks on swimming to open water, along with Marlin who tells him to listen to what he sees to which he refuses to listen, but when the divers emerge, Mr. Ray protects all his students except Nemo who is later captured by one of the divers. At the end of the film after Nemo is finally rescued, he takes the class on a field trip to the drop-off, much to Marlin's discomfort for his son's sake. He is last seen with a newcomer student named Squirt who joins the whole class on another field trip.

Mr. Ray returns in the sequel this time only appearing at the beginning of the film. In this film, he first appears telling his class about the stingray migration, a journey back to home as he takes the class to the spot where the stingray migration shows up. When the stingrays show up, Dory, who was staring at the seaweed thinking about her past, accidentally gets swooped up by the stingray swarm, knocking her out unconsciously. He is last seen wishing Dory good luck on finding her parents. In the end, Mr. Ray leaves his class under Hank, Destiny, and Bailey while he joins the migration. Unlike the first film, he is not seen after this point in the film. He is also mentioned by Kathy when Hank heard a question. 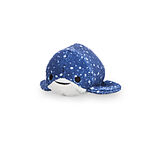 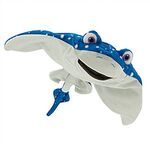 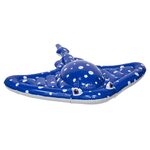 Mr. Ray at the entrance to The Art of Animation Resort