Wimpish behavior, Stanley driving the truck with a tank full of water, being arrested

Violates his parole and gets arrested for his crimes

"This isn't a girl scout camp."
Mr. Sir is the secondary antagonist from the 2003 live-action film, Holes based on Louis Sachar's novel. He is one of the counselors at Camp Green Lake. It is revealed at the end of the film that Mr. Sir is a paroled criminal, who apparently committed a crime in El Paso. Carrying the gun he uses against yellow-spotted lizards was a direct violation of his parole.

Mr. Sir is rude and immature, taking his job seriously but not truly caring for the adolescents involved.

Mr. Sir can use a gun effectively and he can hold a teenager over a table without effort. 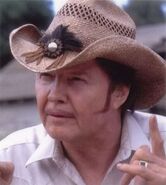 Retrieved from "https://disney.fandom.com/wiki/Mr._Sir?oldid=3993893"
Community content is available under CC-BY-SA unless otherwise noted.